Construction of Fullerenes and Pogorelov Polytopes with 5-, 6- and one 7-Gonal Face

A Pogorelov polytope is a combinatorial simple 3-polytope realizable in the Lobachevsky (hyperbolic) space as a bounded right-angled polytope. These polytopes are exactly simple 3-polytopes with cyclically 5-edge connected graphs. A Pogorelov polytope has no 3- and 4-gons and may have any prescribed numbers of k-gons, . Any simple polytope with only 5-, 6- and at most one 7-gon is Pogorelov. For any other prescribed numbers of k-gons, , we give an explicit construction of a Pogorelov and a non-Pogorelov polytope. Any Pogorelov polytope different from k-barrels (also known as Löbel polytopes, whose graphs are biladders on vertices) can be constructed from the 5- or the 6-barrel by cutting off pairs of adjacent edges and connected sums with the 5-barrel along a 5-gon with the intermediate polytopes being Pogorelov. For fullerenes, there is a stronger result. Any fullerene different from the 5-barrel and the -nanotubes can be constructed by only cutting off adjacent edges from the 6-barrel with all the intermediate polytopes having 5-, 6- and at most one additional 7-gon adjacent to a 5-gon. This result cannot be literally extended to the latter class of polytopes. We prove that it becomes valid if we additionally allow connected sums with the 5-barrel and 3 new operations, which are compositions of cutting off adjacent edges. We generalize this result to the case when the 7-gon may be isolated from 5-gons. View Full-Text
Keywords: fullerenes; right-angled polytopes; truncation of edges; connected sum; k-belts; p-vector; cyclically 5-edge connected graph fullerenes; right-angled polytopes; truncation of edges; connected sum; k-belts; p-vector; cyclically 5-edge connected graph
►▼ Show Figures 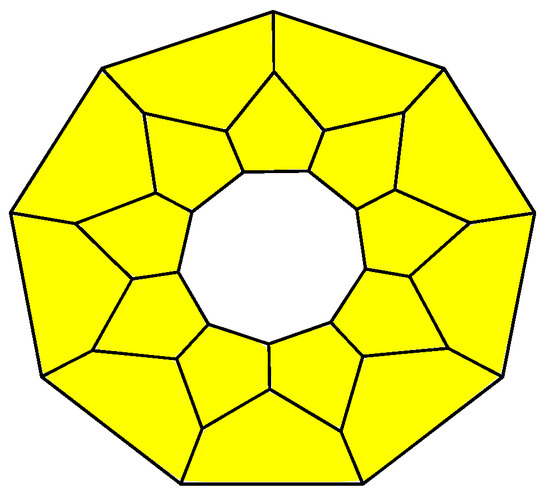