David vs. Goliath: The Structure, Function, and Clinical Prospects of Antibody Fragments
Previous Article in Journal

Practically, IgG charge can contribute significantly to thermodynamic nonideality, and hence to solubility and viscosity. Biologically, IgG charge isomers exhibit differences in clearance and potency. It has been known since the 1930s that all immunoglobulins carry a weak negative charge in physiological solvents. However, there has been no systematic exploration of this fundamental property. Accurate charge measurements have been made using membrane confined electrophoresis in two solvents (pH 5.0 and pH 7.4) on a panel of twelve mAb IgGs, as well as their F(ab’)2 and Fc fragments. The following observations were made at pH 5.0: (1) the measured charge differs from the calculated charge by ~40 for the intact IgGs, and by ~20 for the Fcs; (2) the intact IgG charge depends on both Fv and Fc sequences, but does not equal the sum of the F(ab)’2 and Fc charge; (3) the Fc charge is consistent within a class. In phosphate buffered saline, pH 7.4: (1) the intact IgG charges ranged from 0 to −13; (2) the F(ab’)2 fragments are nearly neutral for IgG1s and IgG2s, and about −5 for some of the IgG4s; (3) all Fc fragments are weakly anionic, with IgG1 < IgG2 < IgG4; (4) the charge on the intact IgGs does not equal the sum of the F(ab’)2 and Fc charge. In no case is the calculated charge, based solely on H+ binding, remotely close to the measured charge. Some mAbs carried a charge in physiological salt that was outside the range observed for serum-purified human poly IgG. To best match physiological properties, a therapeutic mAb should have a measured charge that falls within the range observed for serum-derived human IgGs. A thermodynamically rigorous, concentration-dependent protein–protein interaction parameter is introduced. Based on readily measured properties, interaction curves may be generated to aid in the selection of proteins and solvent conditions. Example curves are provided. View Full-Text
Keywords: analytical electrophoresis; IgG subclasses; monoclonal IgG; protein charge; protein–protein interactions analytical electrophoresis; IgG subclasses; monoclonal IgG; protein charge; protein–protein interactions
►▼ Show Figures 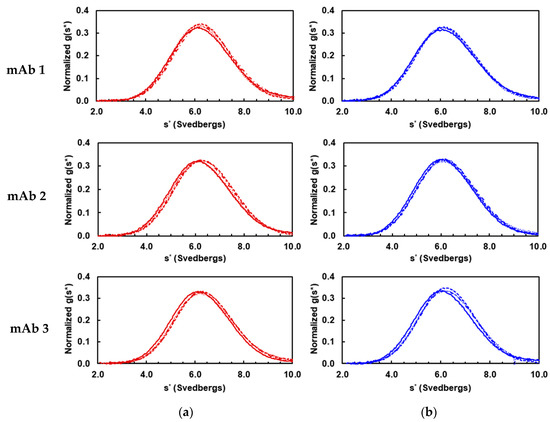