The FDA approval of two anti-HER2 monoclonal antibodies, trastuzumab and pertuzumab, and an antibody-drug conjugate, trastuzumab emtansine, has transformed clinical practice for HER2-positive cancers. However, not all patients respond to therapy, and the majority of responders eventually develop resistance. In addition, cardiotoxicity is a major safety concern for their clinical use. Thus, there remains a need for the discovery and development of novel classes of HER2-targeted therapeutics with high efficacy and specificity. In this study, we report the identification and characterization of fully human single-domain antibodies (dAbs) targeting HER2 epitopes that are highly conserved among various species and non-overlapping with those of trastuzumab and pertuzumab. An Fc-fusion protein of the best binder demonstrated much higher inhibitory activity against HER2-amplified human breast cancer cell lines than trastuzumab and pertuzumab. Unlike the latter, however, it did not have an effect on gastric and ovarian cancer cell lines with HER2 overexpression. The dAb-Fc fusion protein showed poor pharmacokinetics in mice, thus limiting its potential for therapeutic use. It could be useful as an agent for the exploration of functionally important conserved structures on HER2 with implications for the design of novel therapeutics and elucidation of mechanisms of HER2-mediated tumorigenesis. View Full-Text
Keywords: HER2; cancer; therapy; domain antibody; conserved epitope HER2; cancer; therapy; domain antibody; conserved epitope
►▼ Show Figures 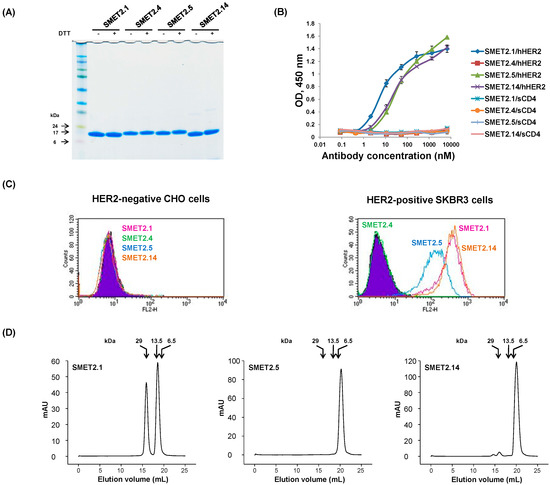