Peptides for Infectious Diseases: From Probe Design to Diagnostic Microarrays

Peptides and peptidomimetics have attracted revived interest regarding their applications in chemical biology over the last few years. Their chemical versatility, synthetic accessibility and the ease of storage and management compared to full proteins have made peptides particularly interesting in diagnostic applications, where they proved to efficiently recapitulate the molecular recognition properties of larger protein antigens, and were proven to be able to capture antibodies circulating in the plasma and serum of patients previously exposed to bacterial or viral infections. Here, we describe the development, integration and application of strategies for computational prediction and design, advanced chemical synthesis, and diagnostic deployment in multiplexed assays of peptide-based materials which are able to bind antibodies of diagnostic as well as therapeutic interest. By presenting successful applications of such an integrated strategy, we argue that they will have an ever-increasing role in both basic and clinical realms of research, where important advances can be expected in the next few years.
Keywords: molecular dynamics; microarrays; diagnostics; computational chemistry; computational biology; peptides molecular dynamics; microarrays; diagnostics; computational chemistry; computational biology; peptides

Peptides are extremely versatile molecules with a wide range of applications. Peptides are attractive for chemists and chemical biologists thanks to the rich diversity of chemical functionalities they can potentially display. Indeed, amino acid building-blocks recapitulate all of the main traits of organic chemistry reactivities through their side chain groups, which range from hydrophobic and aromatic, to hydrophilic, acid, basic, and charged. The synthetic accessibility of linear chains through solid-phase methods, combined to the possibility to further derivatize side chains, opens access to a wide spectrum of chemical diversity and reactivity for the products.
It comes as no surprise that the use of peptides and peptidomimetics in drug discovery in the development of peptide-based materials for medical devices, and even in vaccinology, has recently met with renewed enthusiasm. Indeed, peptides play key roles in a number of biochemical pathways in and outside cells, making the discovery of artificial sequences (or mimics) which are able to either interfere or synergize with the respective natural processes an attractive strategy towards the production of new materials: as an example, the advantages they can offer as drugs are specificity, potency, and low toxicity. However, practical hurdles such as their poor stability, short half-life, and the fact that they are targeted by proteases have somewhat limited the realization of their full potential in medicinal chemistry.
While these limitations still call for significant efforts in the pharmacological setting, peptides and peptide-based derivatives can certainly offer great opportunities in the field of probe development for disease diagnostics.
In this framework, peptide microarrays are appealing tools as they allow the simultaneous screening of hundreds to thousands of different sequences (and potentially structures, if conformational control is introduced) immobilized in spatially ordered patterns of spots on solid supports [1,2]. After incubation with a biological sample, specific interactions that take place on the single spots are detected in a label-free mode by surface plasmon resonance or mass spectrometry or in a label-dependent manner through fluorescence, chemiluminescence or colorimetry.
Peptide microarrays are increasingly being used in the biomedical area for the screening of enzyme function and inhibition [3] and to profile the immune-responses to pathologies by the capturing of disease-related antibodies [4,5] from body fluids.
Despite great improvements in the time-to-result and the excellent sensitivity and specificity provided by nucleic acid-based approaches to test for infectious diseases (PCR, sequencing, and DNA microarrays) [6,7], serological methods have a number of advantages including their low cost, multiplexing capacity and ease of coupling to simple devices such as lateral flow tests for use with minimal or no laboratory infrastructures.
In this context, it is now well appreciated that, in many disease conditions, antibody-mediated responses may precede the manifestation of actual symptoms, sometimes even for a long time. This holds true for bacterial and viral infections. If the immune system has responded to a threat with a B-cell response, it is reasonable to assume that circulating antibodies, elicited specifically against molecular targets on pathogenic factors, could aptly represent efficacious biomarkers of the disease. The capture and detection of such antibodies expectedly requires the availability of their respective antigens as probes.
To this end, the use of whole (attenuated) pathogens poses relevant problems as micro-organisms may be hard to culture in vitro, and therefore their production is impractical.
The advent of reverse vaccinology has given a huge boost to the discovery of tools that are more manageable and amenable to use as molecular probes. Reverse vaccinology applies bioinformatic methods to mine pathogen genomes to identify protein antigens (Ag) that are typically expressed on the outer membrane surface, and are thus most prone to be recognized by molecules of the immune system [8,9,10,11]. Typically, this is achieved by identifying specific sequence motifs, such as those encoding for outer membrane proteins. The predicted Ag is then expressed, produced, and used in subsequent experimental tests. Full-length proteins, however, may themselves be difficult to handle, suffer from stability problems and in some cases may be recognized by more than one single Ab, giving rise to potential misinterpretations in the diagnostic setting.
A plausible way to overcome these obstacles would be to identify the regions of the antigen that are specifically recognized in the course of an immune response. Chemical and structural information on such regions, called epitopes, could then be used as template to develop mimics that bind specifically to the antigen-binding pocket of the desired disease-relevant antibody. Peptides and peptidomimetics represent the ideal chemical tools to realize small epitope mimics that recapitulate the essential determinants of immune-reactivity and Ab-recognition of the cognate full-length antigen.
At this point, two main problems need to be tackled. The first lies in the identification of the epitope region on an antigen, most often in the absence of detailed X-ray information on the relevant antigen–antibody complex. In this context, sequence and structure-based computational methods have played an increasingly relevant role in recent years, facilitating the identification of molecules which are able to efficiently engage disease biomarkers.
The second concerns the optimization of the presentation of the synthetic immunoreactive molecule(s) on diagnostic devices to efficiently capture the desired Abs. Circulating antibodies produced against disease-specific antigens can in fact be detected by passing patient fluids (serum, plasma, etc.) over an immobilized bait and then measuring the amount of antibody retained with a labeled secondary antibody. Novel methods of oriented display, as well as the use of optimized surfaces for the attachment of the probes, can aptly provide a significant increase in the performances of novel diagnostic tools.
From this perspective, we will present and discuss the work, views and methods we have developed and integrated in our laboratory to discover, design, synthesize, and display novel peptide-based molecules with the aim of realizing the potential of epitope-mimicry in the development of efficient diagnostic methods for the detection of disease biomarkers.

3. The Importance of Probe Presentation: Conformation and Surface Chemistry Matters

The use of peptide-based materials for diagnostic purposes holds a great deal of potential for further development and applications. It is tempting to suggest that methods for the de novo prediction of interacting sequences can be used not only to mimic antigen–antibody interactions but complex (even multivalent) interactions in general [58,59,60,61,62]. The latter are an extremely challenging class of targets, due to the peculiar conformational and chemical characteristics of the interacting surfaces; the selection, design, and optimal display of mimics of the regions that underpin protein–protein molecular recognition can be aptly used to detect specific PPIs in normal vs. transformed cells. In this context, polyvalent interactions, connected to the presentation of multiple binding sequences, can collectively yield much richer information and stronger responses than their single-sequence counterparts, generating new opportunities for diagnosis as well as details on the basis for mechanisms which are apt to agonize or antagonize biological interactions.
In this context, the improvement in multiscale methods will permit us to simulate events such as the recognition of multiple receptors on host-cells, virus entry or bacterial invasion with a level of detail that can be directly translated into new design rules for the development of biomimetic systems [63,64,65]. Moreover, the dramatic expansion of computer learning methods and the ever-increasing computational power will facilitate the application of artificial intelligence approaches aimed at exploiting the wealth of data made available by genomics, proteomics, epidemiology programs (to name a few) into generating new methods for the design and engineering of peptide-based probes. Machine learning algorithms, for instance, could be used to reveal non-trivial patterns that exist between specific recognition sequences, their functions in their cognate proteins and biochemical processes, and their reverberations at the systems level. Approaches of this kind have already been applied in protein secondary structure prediction, drug discovery, and the deimmunization of immunoreactive sequences [66,67,68,69,70,71,72]. 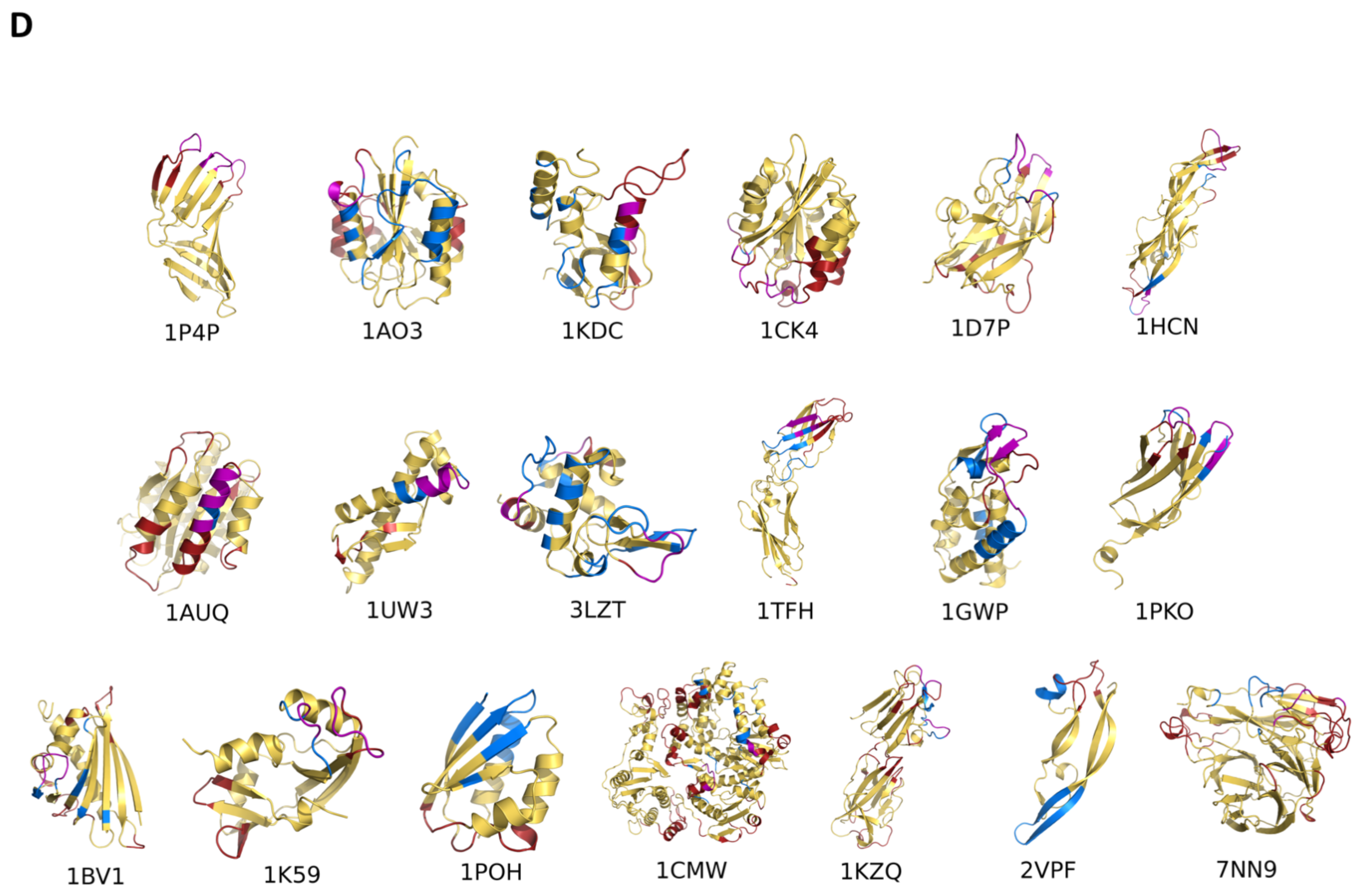 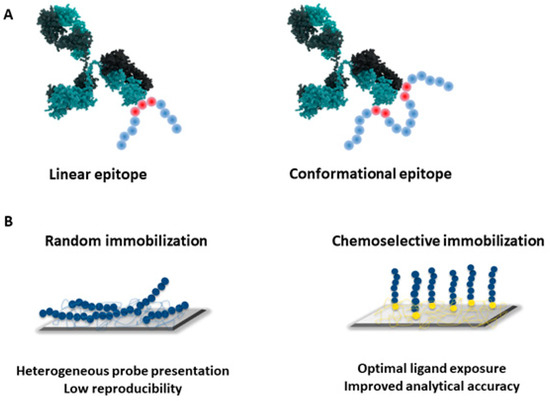 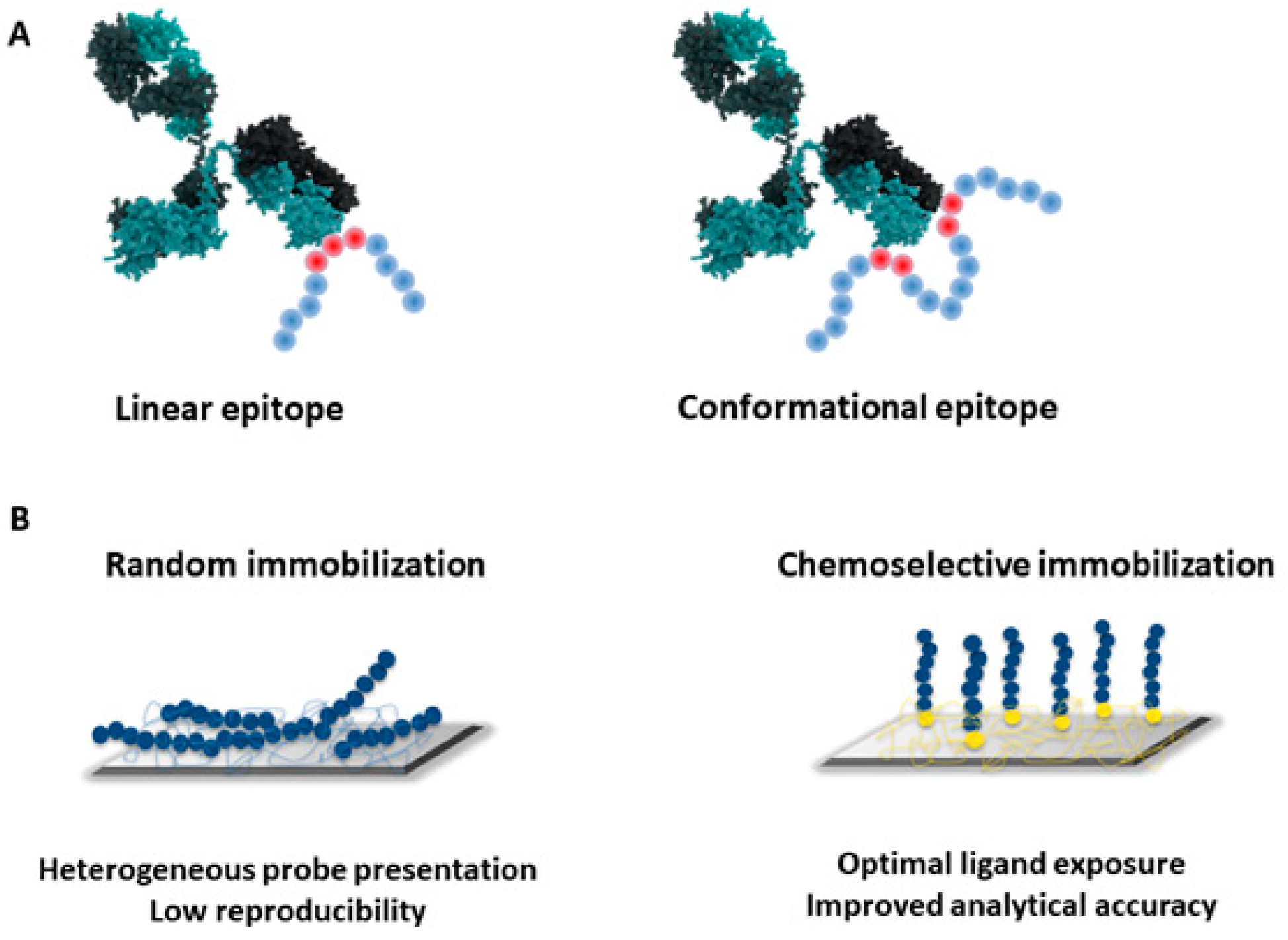 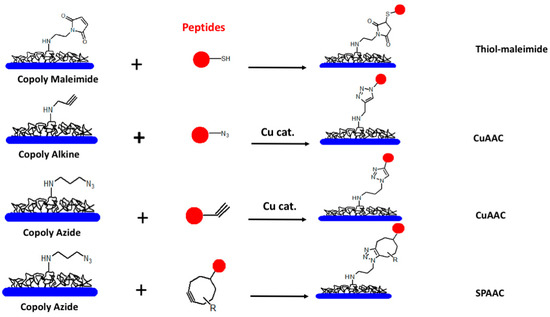 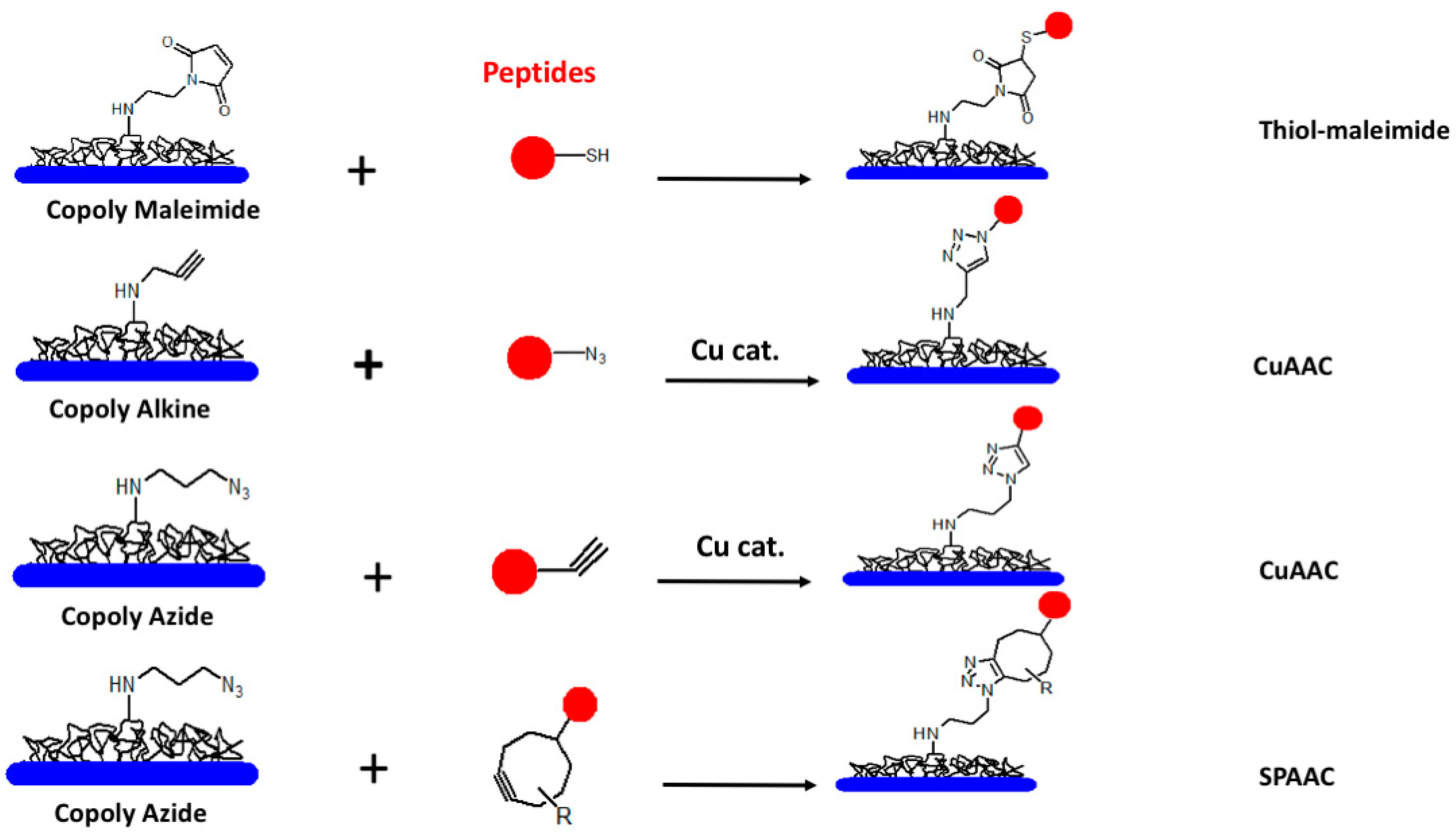