Salmonella Typhimurium is one of the leading causes of foodborne diseases worldwide. Biosensors and immunoassays utilizing monoclonal antibodies are widely used for the detection and subtyping of S. Typhimurium. However, due to insufficient information on the nature of binding with S. Typhimurium flagellin, the selection of appropriate antibodies for assay development is a cumbersome task. Hence, we aimed to compare the binding kinetics of a panel of monoclonal antibodies and their relative binding sites to flagellin antigen using a surface plasmon resonance biosensor. Initially, the flagellin was captured on the sensor surface through an immobilized anti-flagellin antibody. The interactions of different concentrations of monoclonal antibodies to flagellin were determined, and binding curves were fitted using 1:1 bio-interaction model to calculate the kinetic parameters. For epitope mapping, pairwise comparisons were completed to determine the binding inhibition of each paired combination of monoclonal antibodies. It was found that these monoclonal antibodies differed significantly (p < 0.05) in association rate, dissociation rate, and equilibrium dissociation constants. Of the five monoclonal antibodies, only two interfered with the binding of each other. Four distinct epitopes located within a 23 kDa domain of flagellin were identified. Findings from this study provide crucial information needed for the further development and optimization of biosensors and other immunoassays for the detection and subtyping of Salmonella. View Full-Text
Keywords: Salmonella Typhimurium; flagellin; epitope mapping; kinetic analysis; surface plasmon resonance Salmonella Typhimurium; flagellin; epitope mapping; kinetic analysis; surface plasmon resonance
►▼ Show Figures 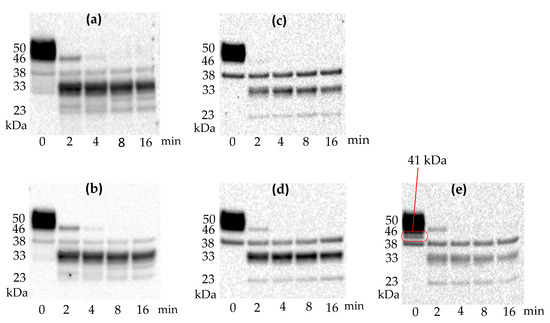