The social interest in outdoor advertising signs, which have been recognized as an important element affecting impressions of a town, has been gradually increasing. However, when these signs are fully scattered around commercial areas, an oppressive feeling may be experienced by people, which cannot be neglected. Thus, this paper attempts to identify the characteristics of such visual oppression in urban landscapes through factor analysis, aiming to control them in such a way that does not oppress people. In addition, comparisons between Japanese and foreign nationals (i.e., foreign students from the Republic of Korea and the People’s Republic of China) were carried out, in order to check for any differences in perception of oppressive feelings depending on nationality. At the same time, to check for the possibility of different levels of perception depending on nationality, 20 Japanese and 20 foreign nationals (including Koreans and Chinese) were selected as test subjects. We expect this study to provide useful research material when reviewing the possibility of creating desirable urban landscapes or establishing guidelines for outdoor advertisements. For the research, landscape pictures focusing on outdoor advertising signs (15 wall, 6 roof-top, and 6 projection advertising signs) were taken as a sample for analysis. They were then presented in a 3D cyberdome for factor analysis, focusing on an impression evaluation test in relation to oppressive feelings. In addition, among the data obtained from the sample analysis, “Proportion,” which was considered to be the most influential factor on the oppressive feeling, was studied. The correlation coefficient between these two populations was 0.918, revealing a high level of correlation; thus, all subjects were treated as a single population. The factor analysis revealed 50.87% for the first factor (Evaluation), 25.39% for the second factor (capacity), and 9.47% for the third factor (Emotion), suggesting a relationship wherein the first factor decreased when the oppressive feeling increased; while the oppressive feeling increased along with the second factor. View Full-Text
Keywords: landscape; outdoor advertisement signboard; pressure; image evaluation; VR; virtual reality landscape; outdoor advertisement signboard; pressure; image evaluation; VR; virtual reality
►▼ Show Figures 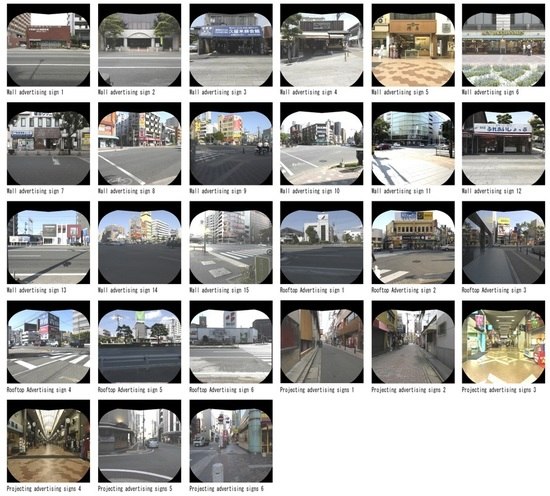