Evaluation of the Objectives and Concerns of Farmers to Apply Different Agricultural Managements in Olive Groves: The Case of Estepa Region (Southern, Spain)
Next Article in Special Issue

Proportional Variation of Potential Groundwater Recharge as a Result of Climate Change and Land-Use: A Study Case in Mexico
Previous Article in Special Issue

There are numerous studies on the effect of grazing on the physical and chemical parameters of soils. However, the impact of grazing on the temperature regime of the alas soils in Central Yakutia is still poorly understood. This paper presents the results of long-term observations of the state of the soil-and-plant cover of thermokarst basins—i.e., alases—located in the Lena-Amga interfluve and actively used as pastureland. Observations of the process of the self-restoration of grass cover and changes in the temperature regime of alas soils were carried out on different variants (with isolation from grazing and without isolation). A significant increase in the average height of the grass stand and its foliage projective cover was observed with a gradual reduction in the number of species when isolated from grazing. Changes in the structure of the alas vegetation cover influence the microclimate of the soil. As a result of livestock grazing, the mean annual soil temperature rises and the amount and depth of the penetration of active temperatures increase. The most severe changes in the temperature regime occur in years with an abnormally high cover of snow. The soil warming observed during grazing undoubtedly has a favorable effect on soil organisms. However, in conditions of climate warming, grazing, especially overgrazing, can disrupt the permafrost regime and thereby provoke or intensify thermokarst phenomena. View Full-Text
Keywords: soil temperature; climate change; alas soils; grazing soil temperature; climate change; alas soils; grazing
►▼ Show Figures 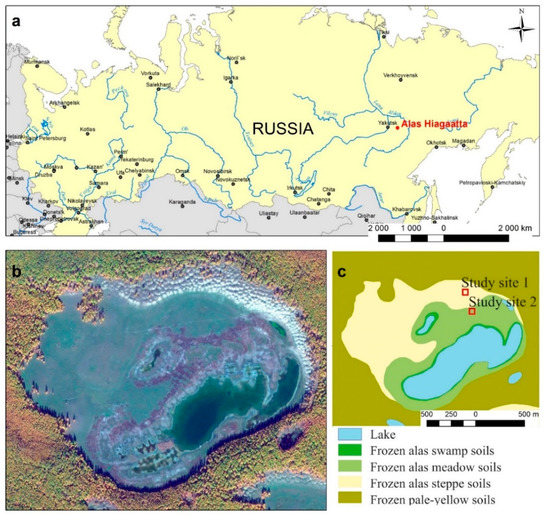