Assessing the Extent of Historical, Current, and Future Land Use Systems in Uganda
Previous Article in Journal

Assessing the Spatial Drivers of Land Use and Land Cover Change in the Protected and Communal Areas of the Zambezi Region, Namibia

Understanding the patterns and drivers of land use and land cover (LULC) changes is fundamental for rational and specific planning for sustainable land management. Using remote sensing techniques, geographic information systems (GIS) and statistical modeling via multinomial logistic regression, we sought to identify spatial variables that determine LULC change and their extent over time in the protected and communal areas of the Zambezi Region, Namibia. Multi-temporal satellite imagery of the Landsat series was used to map changes over a period of twenty-six years, divided into three stages (1984–1991, 1991–2000 and 2000–2010). Post classification change detection methodologies were used to determine conversions between LULC classes. Additionally, socio-economic characteristics of the area were used to identify drivers of changes. Four spatial drivers of LULC change that we identified included the distance to the nearest road, distance to settlements, population density and fire return periods. Population density, distance to settlements and fire return period were significantly associated with conversion from crop/grass land to crop/grass land and forest land to crop/grass, forest land to bare land and forest land to forest land in the protected area. In communal areas, distance to the road was found to significantly influence conversion from crop/grass land to crop/grass land. The study concluded that the influence of these drivers is attributable to distinct political and agro-demographical differences during the study period. Policy makers and planners need to take these drivers into consideration together with their subsidiaries to respond and make sound decisions regarding undesirable changes in LULC. View Full-Text
Keywords: land use; land cover; spatial drivers; logistic regression; Zambezi land use; land cover; spatial drivers; logistic regression; Zambezi
►▼ Show Figures 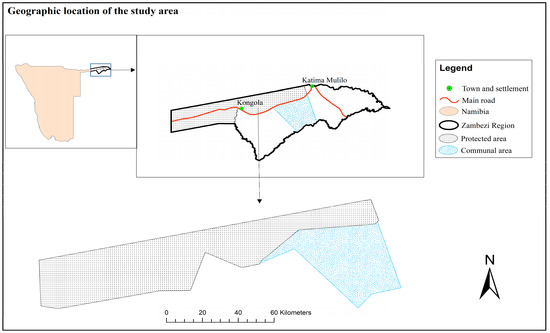