Fire Data as Proxy for Anthropogenic Landscape Change in the Yucatán

Fire is one of the earliest and most common tools used by humans to modify the earth surface. Landscapes in the Yucatán Peninsula are composed of a mosaic of old growth subtropical forest, secondary vegetation, grasslands, and agricultural land that represent a well-documented example of anthropogenic intervention, much of which involves the use of fire. This research characterizes land use systems and land cover changes in the Yucatán during the 2000–2010 time period. We used an active fire remotely sensed data time series from the Moderate Resolution Imaging Spectroradiometer (MODIS), in combination with forest loss, and anthrome map sources to (1) establish the association between fire and land use change in the region; and (2) explore links between the spatial and temporal patterns of fire and specific types of land use practices, including within- and between-anthromes variability. A spatial multinomial logit model was constructed using fire, landscape configuration, and a set of commonly used control variables to estimate forest persistence, non-forest persistence, and change. Cross-tabulations and descriptive statistics were used to explore the relationships between fire occurrence, location, and timing with respect to the geography of land use. We also compared fire frequencies within and between anthrome groups using a negative binomial model and Tukey pairwise comparisons. Results show that fire data broadly reproduce the geography and timing of anthropogenic land change. Findings indicate that fire and landscape configuration is useful in explaining forest change and non-forest persistence, especially in fragmented (mosaicked) landscapes. Absence of fire occurrence is related usefully to the persistence of spatially continuous core areas of older growth forest. Fire has a positive relationship with forest to non-forest change and a negative relationship with forest persistence. Fire is also a good indicator to distinguish between anthrome groups (e.g., croplands and villages). Our study suggests that active fire data series are a reasonable proxy for anthropogenic land persistence/change in the context of the Yucatán and are useful to differentiate quantitatively and qualitatively between and within anthromes. View Full-Text
Keywords: tropical fire; land use/land cover change; MODIS; anthrome; Yucatán Peninsula; spatial model tropical fire; land use/land cover change; MODIS; anthrome; Yucatán Peninsula; spatial model
►▼ Show Figures 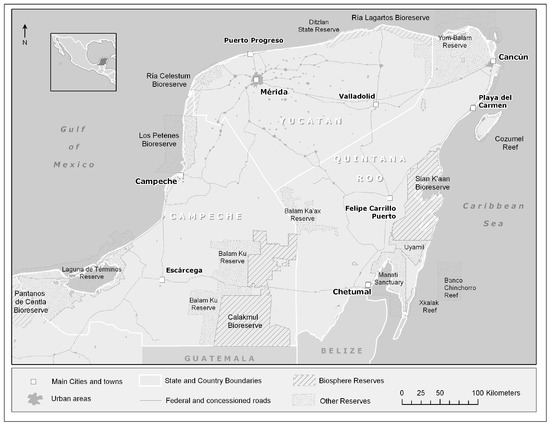