Land Use as a Motivation for Railway Trespassing: Experience from the Czech Republic
Next Article in Special Issue

Fire Data as Proxy for Anthropogenic Landscape Change in the Yucatán

Anthropogenic land cover change (ALCC) is the most important transformation of the Earth system that occurred in the preindustrial Holocene, with implications for carbon, water and sediment cycles, biodiversity and the provision of ecosystem services and regional and global climate. For example, anthropogenic deforestation in preindustrial Eurasia may have led to feedbacks to the climate system: both biogeophysical, regionally amplifying winter cold and summer warm temperatures, and biogeochemical, stabilizing atmospheric CO concentrations and thus influencing global climate. Quantification of these effects is difficult, however, because scenarios of anthropogenic land cover change over the Holocene vary widely, with increasing disagreement back in time. Because land cover change had such widespread ramifications for the Earth system, it is essential to assess current ALCC scenarios in light of observations and provide guidance on which models are most realistic. Here, we perform a systematic evaluation of two widely-used ALCC scenarios (KK10 and HYDE3.1) in northern and part of central Europe using an independent, pollen-based reconstruction of Holocene land cover (REVEALS). Considering that ALCC in Europe primarily resulted in deforestation, we compare modeled land use with the cover of non-forest vegetation inferred from the pollen data. Though neither land cover change scenario matches the pollen-based reconstructions precisely, KK10 correlates well with REVEALS at the country scale, while HYDE systematically underestimates land use with increasing magnitude with time in the past. Discrepancies between modeled and reconstructed land use are caused by a number of factors, including assumptions of per-capita land use and socio-cultural factors that cannot be predicted on the basis of the characteristics of the physical environment, including dietary preferences, long-distance trade, the location of urban areas and social organization. View Full-Text
Keywords: land use; paleoecology; environmental history; human-environment interactions land use; paleoecology; environmental history; human-environment interactions
►▼ Show Figures 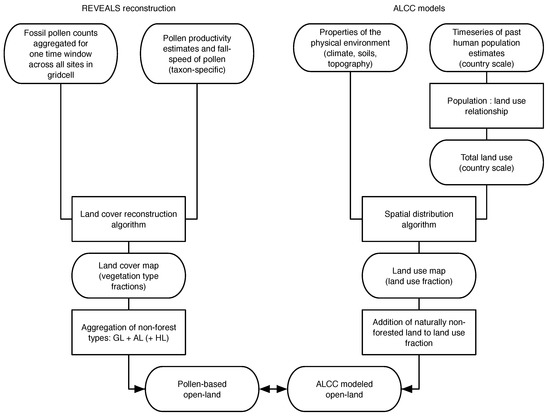