Space-borne Synthetic Aperture Radar (SAR) has the capability to image subsurface features down to several meters in arid regions. A first demonstration of this capability was performed in the Egyptian desert during the early eighties, thanks to the first Shuttle Imaging Radar mission. Global coverage provided by recent SARs, such as the Japanese ALOS/PALSAR sensor, allowed the mapping of vast ancient hydrographic systems in Northern Africa. We present a summary of palaeohydrography results obtained using PALSAR data over large deserts such as the Sahara and the Gobi. An ancient river system was discovered in eastern Lybia, connecting in the past the Kufrah oasis to the Mediterranean Sea, and the terminal part of the Tamanrasett river was mapped in western Mauritania, ending with a large submarine canyon. In southern Mongolia, PALSAR images combined with topography analysis allowed the mapping of the ancient Ulaan Nuur lake. We finally show the potentials of future low frequency SAR sensors by comparing L-band (1.25 GHz) and P-band (435 MHz) airborne SAR acquisitions over a desert site in southern Tunisia. View Full-Text
Keywords: SAR; radar; deserts; palaeohydrography; Sahara; Gobi SAR; radar; deserts; palaeohydrography; Sahara; Gobi
►▼ Show Figures 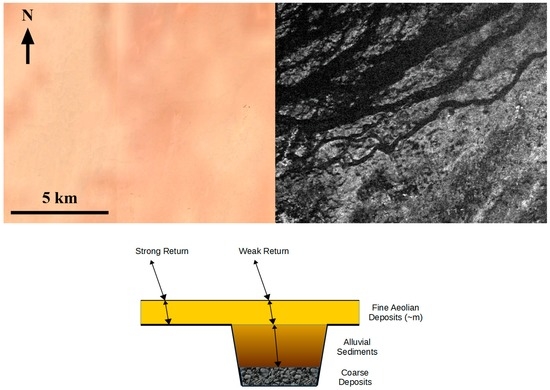