Lake Urmia, the second largest saline Lake on earth and a highly endangered ecosystem, is on the brink of a serious environmental disaster similar to the catastrophic death of the Aral Sea. Progressive drying has been observed during the last decade, causing dramatic changes to Lake Urmia’s surface and its regional water supplies. The present study aims to improve monitoring of spatiotemporal changes of Lake Urmia in the period 1975–2015 using the multi-temporal satellite altimetry and Landsat (5-TM, 7-ETM+ and 8-OLI) images. In order to demonstrate the impacts of climate change and human pressure on the variations in surface extent and water level, Lake Sevan and Van Lake with different characteristics were studied along with the Urmia Lake. Normalized Difference Water Index-Principal Components Index (NDWI-PCs), Normalized Difference Water Index (NDWI), Modified NDWI (MNDWI), Normalized Difference Moisture Index (NDMI), Water Ratio Index (WRI), Normalized Difference Vegetation Index (NDVI), Automated Water Extraction Index (AWEI), and MultiLayer Perceptron Neural Networks (MLP NNs) classifier were investigated for the extraction of surface water from Landsat data. The presented results revealed that MLP NNs has a better performance in the cases where the other models generate poor accuracy. The results show that the area of Lake Sevan and Van Lake have increased while the area of Lake Urmia has decreased by ~65.23% in the past decades, far more than previously reported (~25% to 50%). Urmia Lake’s shoreline has been receding severely between 2010 and 2015 with no sign of recovery, which has been partly blamed on prolonged droughts, aggressive regional water resources development plans, intensive agricultural activities, and anthropogenic changes to the system. The results also indicated that (among the proposed factors) changes in inflows due to overuse of surface water resources and constructing dams (mostly during 1995–2005) are the main reasons for Urmia Lake’s shoreline receding. The model presented in this manuscript can be used by managers as a decision support system to find the effects of building new dams or other infrastructures. View Full-Text
Keywords: water management; drought monitoring; long-term change detection; anthropogenic activities; wetland identification water management; drought monitoring; long-term change detection; anthropogenic activities; wetland identification
►▼ Show Figures 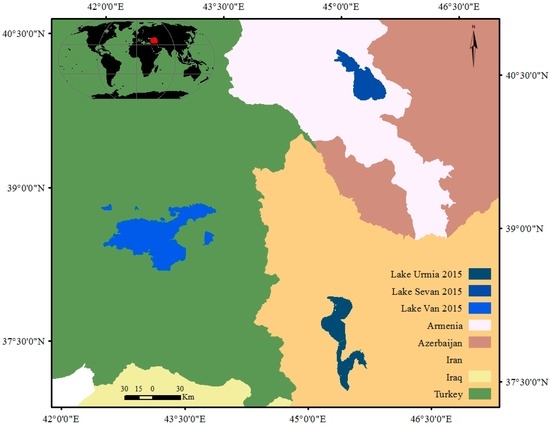