In California, alfalfa is grown on a large area ranging between 325,000 and 410,000 hectares and ranks among the thirstiest crops. While the hay production industry is often scrutinized for the large usage of the state’s agricultural water, alfalfa is a crucial feed-supplier for the livestock and dairy sectors, which rank among the most profitable commodity groups in the state. Sub-surface drip irrigation (SDI), although only practiced on approximately 2% of the alfalfa production area in California, is claimed to have the potential to significantly increase hay yield (HY) and water productivity (WP) compared with surface irrigation (SI). In 2014–2016 we interviewed a number of growers pioneering SDI for alfalfa production in Central and Southern California who reported that yield improvements in the order of 10–30% and water saving of about 20–30% are achievable in SDI-irrigated fields compared with SI, according to their records and perceptions collected over few years of experience. Results from our research on SDI at the University of California, Davis, revealed significantly smaller yield gain (~5%) and a slight increase of water use (~2–3%) that are similar to findings from earlier research studies. We found that most of the interviewed alfalfa producers are generally satisfied with their SDI systems, yet face some challenges that call for additional research and educational efforts. Key limitations of SDI include high investment costs, use of energy to pressurize water, the need for more advanced irrigation management skills, and better understanding of soil-water dynamics by farm personnel. SDI-irrigated fields also need accurate water monitoring and control, attentive prevention and repair of rodent damages, and careful salinity management in the root zone. In this paper we attempt to evaluate the viability of the SDI technology for alfalfa production on the basis of preliminary results of our research and extension activities, with focus on its water and energy footprints within the context of resource efficiency. View Full-Text
Keywords: Medicago sativa L.; flood irrigation; micro-irrigation; eco-efficiency; drought Medicago sativa L.; flood irrigation; micro-irrigation; eco-efficiency; drought
►▼ Show Figures 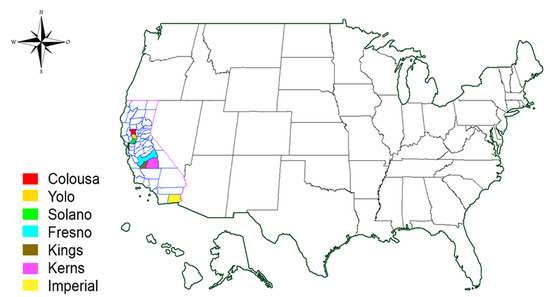