In the dry zone of Sri Lanka, human-made reservoirs have served for the collection, storage and distribution of rainfall and runoff and provide irrigation water for the cultivation of paddy for 2000 years. This paper introduces the layout and function of four traditional village tank cascade systems in the hinterland of Anuradhapura, located in the North Central Province in Sri Lanka. In contrast to large-scale tanks, these systems are managed and maintained by local villagers. Sedimentological data from two tanks provide information about processes leading to the formation of these deposits and their post-sedimentary, partly human-induced alterations. The presented data support the hypothesis, that the decentral managed tanks were not affected by severe erosion after the abandonment of the ancient capital Anuradhapura in the 11th century CE, a period that was characterized by socio-economic instability and increased climatic fluctuations. Presented results underline the significance of small-scale tank cascades systems to buffer the effects of climatic fluctuations and point to their potential as a cornerstone in coping with future climate change in the dry zone of Sri Lanka. View Full-Text
Keywords: water harvesting; water storage; water control; traditional knowledge; tank siltation water harvesting; water storage; water control; traditional knowledge; tank siltation
►▼ Show Figures 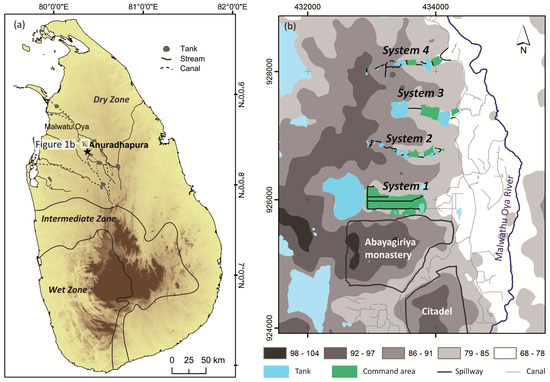