Trace Elements in the Bottom Sediments of the Crimean Saline Lakes. Is It Possible to Explain Their Concentration Variability?

Climate induced drought is a prominent threat to natural saline aquatic ecosystems by modifying their hydrology and salinity, which impacts the biodiversity of these ecosystems. Lake Nyamithi is a naturally saline lake in South Africa that experienced the effects of a two-year supra-seasonal drought (2015–2016). This study aimed to determine potential effects of the drought and accompanying increased salinity (between 9.8 and 11.5 g L−1) on aquatic invertebrate communities of Lake Nyamithi, and assess their potential recovery following the drought. Aquatic invertebrates and water were collected for biodiversity and chemical assessments during predrought conditions (2014), the peak of the drought (2016) and after the site had received water (2017). Taxon richness was considerably reduced during the peak of the drought as many biota could not tolerate the increased salinity. Ecological resilience and recovery was evident in the lake since numerous biota (re)colonized the lake promptly after the site received water and salinity decreased (<8 g L−1). By the end of 2017, invertebrate biodiversity exceeded that of predrought conditions. Although some biota may be able to temporarily cope with extreme weather conditions, frequent or prolonged periods of drought and increased salinity pose a threat to naturally saline lakes such as Nyamithi and dilution with fresh water is vital for the persistence of species diversity and ecological integrity. View Full-Text
Keywords: climate change; drought; ecological resilience; endorheic lake; salinity; Southern Africa climate change; drought; ecological resilience; endorheic lake; salinity; Southern Africa
►▼ Show Figures 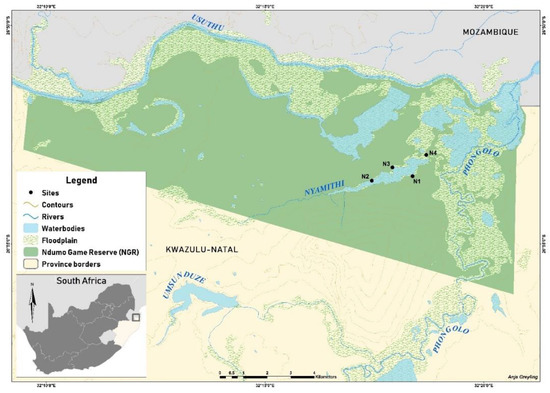