Introduction to the Special Issue “Ecohydrologic Feedbacks between Vegetation, Soil, and Climate”
Previous Article in Journal

In hillslope erosion modeling, the Transport Capacity (Tc) concept describes an upper limit to the flux of sediment transportable by a flow of given hydraulic characteristics. This widely used concept in process-based erosion modeling faces challenges due to scarcity of experimental data to strengthen its validity. In this paper, we test a methodology that infers the exceedance of transport capacity by concentrated flow from changes to soil surface microtopography sustained during rainfall-runoff events. Digital Elevation Models (DEMs) corresponding to pre- and post-rainfall events were used to compute elevation change maps and estimate spatially-varying flow hydraulics ω taken as the product of flow accumulation and local slope. These spatial data were used to calculate a probability of erosion PE at regular flow hydraulics intervals. The exceedance of Tc was inferred from the crossing of the PE = 0.5 line. The proposed methodology was applied to experimental data collected to study the impact of soil subsurface hydrology on soil erosion and sediment transport processes. Sustained net deposition occurred under drainage condition while PE for seepage conditions mostly stayed in the net erosion regime. Results from this study suggest pulsating erosion patterns along concentrated flow networks with intermittent increases in PE to local maxima followed by declines to local minima. These short-range erosion patterns could not be explained by current Tc-based erosion models. Nevertheless, Tc-based erosion models adequately capture observed decline in local PE maxima as ω increased. Applying the proposed approach suggests a dependence of Tc on subsurface hydrology with net deposition more likely under drainage conditions compared to seepage conditions. View Full-Text
Keywords: transport capacity; soil erosion; deposition; microtopography transport capacity; soil erosion; deposition; microtopography
►▼ Show Figures 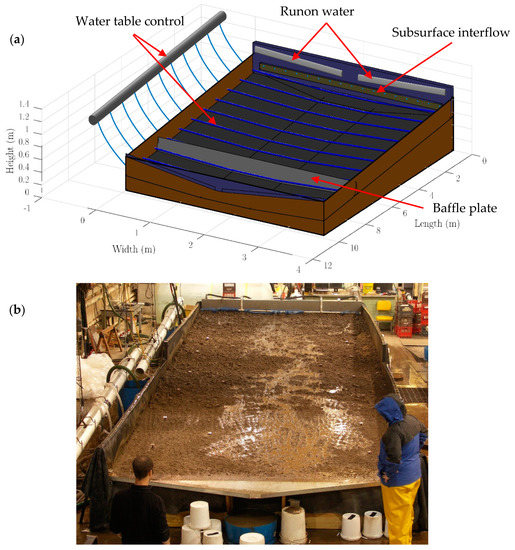