The experiment was conducted at the Key Laboratory of Modern Water-Saving Irrigation of the Xinjiang Production and Construction Corps (85°59′ E, 44°19′ N, altitude 412 m) from April to November 2018 at Shihezi University in Xinjiang, China (Figure 1). The region experiences a typical arid continental climate, with an average annual rainfall of 210 mm, an average annual evaporation of 1600 mm, air temperature of 7.2 °C, sunshine duration of 2865 h and frost-free period lasting 171 days [25]. The active accumulated temperature above 10 °C and 15 °C were 3463 °C and 2960 °C, respectively. Changes in precipitation, reference crop evapotranspiration (ET0, the ET0 is calculated by Penman-Monteith [26]) and maximum atmospheric temperature in the cotton-growing season (from April to November) in 2018 is presented in Figure 2. A total of 153.8 mm of rain fell during the cotton-growing season. Air temperature, precipitation, wind speed, humidity and other meteorological data were recorded by an automatic weather station (TRM-ZS2 type, Jinzhou Sunshine Meteorological Technology Co., Ltd., Jinzhou, China). The weather station was set up at our experiment site.
The experimental area comprised 0.0216 ha. The regional ground-water table remained at a depth of 8 m. The cotton cultivar ‘Nong feng 133’ was used, which is suitable for dense planting, good ventilation, light transmission among populations, early maturity and high yield. This cultivar is also suitable for machine planting and harvesting. The soil particle composition and physical indexes (e.g., dry bulk density and nutrient content) of the 0–100 cm soil layers in the test area are shown in Table 1.

A split-plot experimental design was adopted, whereby the plots did or did not contain concealed pipe drainage. The main plots included T1 (cotton grown under drip irrigation under plastic film combined with concealed pipe drainage) and T2 (cotton grown under conventional drip irrigation under plastic film). Soils with different textures were applied to the subplots, including clay, loam and sandy soil. Each subplot was about 12 m2 (3 m × 4 m), and three replications were conducted in each subplot, with a total of 18 plots. The cotton planting model with one film, three drip tapes and six rows (Figure 3) was adopted for each subplot. We used a machine-harvested cotton planting pattern (10-cm plant distance, 66 cm + 10 cm of wide-narrow rows, and a planting density of 260,000 plants ha−1), and a total of 312 plants were included in each plot. The soil particle composition and physical indexes in the test areas are shown in Table 1.
The cotton was sown using the “dry sowing and wet out” method (the water storage and salt drainage technology for drip irrigation under plastic film). The cotton was planted on 22 April 2018. During the growth period, the drip irrigation method under the film was used to provide the necessary water and nutrients for cotton growth. The drip irrigation capillary was a single-wing labyrinth thin-walled drip tape. The emitter flow rate was 2.6 L h−1. The distance between the drippers was 30 cm, and the thickness of the plastic film was (0.008 ± 0.0003) mm. The water supply system in the study area was pressurized mainly by a water pump, and the pressure gauge and regulating valve were installed at the head of the system. The amount of irrigation, irrigation dates and frequencies, and fertigation frequencies for the T1 and T2 treatments were the same throughout the experiment. The cotton was irrigated 13 times during the whole growth period. In total, 450 mm of irrigation were applied; N fertilizer was applied at 225 kg ha−1 and P fertilizer at 140 kg ha−1 during the whole growth period. Irrigation was carried out by drip irrigation under the mulch. The irrigation interval was 7–10 days: four times during the seedling stage, four times during the flowering period, three times during the bolling period and twice during the mature stage. The fertilizer was dissolved in the water used for irrigation. The details of irrigation and fertilization management during the cotton growth period are shown in Table 2. For each subplot under the T1 treatment, two concealed pipes were buried in each test pit. The concealed pipes were buried in the middle of the wide row of cotton, with a spacing of 1 m, and buried at a depth of 60 cm at a pre-designed slope of 2 %. PVC double walled corrugated pipe 100 mm in diameter was used for the drainage pipe, and eight water inlets were evenly distributed around its circumference. The buried concealed pipe was wrapped with non-woven fabric to prevent soil particles from entering it. The cotton planting mode is shown in Figure 3.

Soil samples were collected from the wide and narrow rows of cotton under plastic film at different stages of plant growth. To measure soil salinity, the oven-dried soil samples were pulverized and passed through a 1 mm sieve. Then, 20 g of soil powder were taken from each sample and mixed at a ratio of 1:5 with water. After being evenly shaken, the mixture was set aside for 2 h. The electrical conductivities (EC1:5) of the mixtures were measured using a portable electrical conductivity meter (DDS11-A, manufactured by Shanghai Leichi, China). The absolute change (ΔS) and relative change (R) in soil salinity were calculated as: where EC1:5 and EC1:5′ (ds m−1) represent soil salinity before sowing and after harvest, respectively.

To measure soil pH, the oven-dried soil samples were pulverized and passed through a 1 mm sieve. Then, 20 g of soil powder were taken from each sample and mixed at a ratio of 1:1 with water. The mixture was stirred three times at intervals of about 1 h. After stirring, the pH of the mixtures was measured using a pH meter.

Five cotton plants from each test pit were selected at the cotton seedling stage (25 May), bud stage (25 June), flower and boll stage (25 July) and boll opening stage (1 September). The plant samples were dried to a constant weight to measure the biomass. Moreover, the date the plants entered each phenological stage (e.g., emergence, squaring, flowering, boll opening, and maturity) was recorded for all plots. The definition of each phenological stage was adopted from Munger et al. [27]. Five representative cotton plants were selected from each plot at the emergence stage. The plant height, leaf length, and leaf width were measured every 10–15 days from the beginning of the emergence stage using a tape measure with an accuracy of 1 mm. The leaf area was measured using an empirical coefficient formula (0.75 × leaf length × leaf width) [28] and a handheld leaf area tester (Yaxin-1241 type, Beijing Yaxin Liyi Technology Co., Ltd., Beijing, China). Then, the average value was used for analysis.

2.3.6. Cotton Yield and Water Use Efficiency

Cotton yield was determined by hand harvesting in the crop following each treatment and calculating the yield per unit area (kg ha−1). The water use efficiency (WUE, kg ha−1 mm−1) was calculated as the ratio between the annual cotton yield (Y) and evapotranspiration (ET) over the growing season in each year [29]. Given the limited influence of groundwater on soil water and the lack of surface runoff at the experimental site, the ET could be calculated as:
where, P0 represents rainfall, I represents irrigation, D represents deep percolation (the amount of concealed pipe drainage) and ΔSWS represents the difference in soil water storage in the 0–100 cm depth of soil between sowing and harvest. Y is the annual cotton yield (kg ha−1).

Representative points within an area of 4 m2 were selected in each test pit prior to harvesting to determine the boll weight and lint percentage. A sub-sample of lint was sent to the Supervision, Inspection and Test Center of Cotton Quality, Ministry of Agriculture and Rural Affairs, Anyang City, Henan Province, China to examine the fiber quality using a high-volume instrument (HVI) [30].

The experimental data were graphed and processed using SPSS 20.0 and Origin 9.0. The SAS package (SAS Institute Inc., Cary, NC, USA) was used to conduct the analysis of variance (ANOVA). Differences were considered statistically significant when p ≤ 0.05.

3.5. Growth Characteristics and Quality of Cotton

3.6. Cotton Yield and Water Use Efficiency

This study evaluated the effects of soil texture on soil water and salt distribution, permeability, pH, cotton growth and water use efficiency using a combined irrigation and drainage technique in the Xinjiang oasis agroecosystem. We came to the following conclusions.
The combination of irrigation and drainage effectively improved the root growth environment of cotton in different soil textures, improved the yield and quality of cotton and provided a new idea to use in promoting agricultural water saving and saline alkali land management.

This research was supported by the National Natural Science Foundation of China (51869027), Key industry innovation and development support plan project of the southern Xinjiang Production and Construction Corps (2020DB004) and Major scientific and technological projects of Xinjiang Production and Construction Corps (2021AA003-1).

The data that support the finding of this study are available from the corresponding author upon reasonable request. 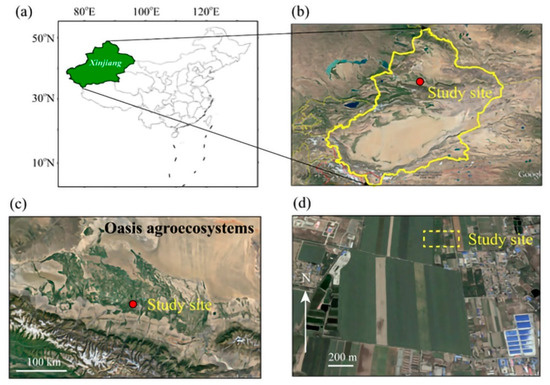 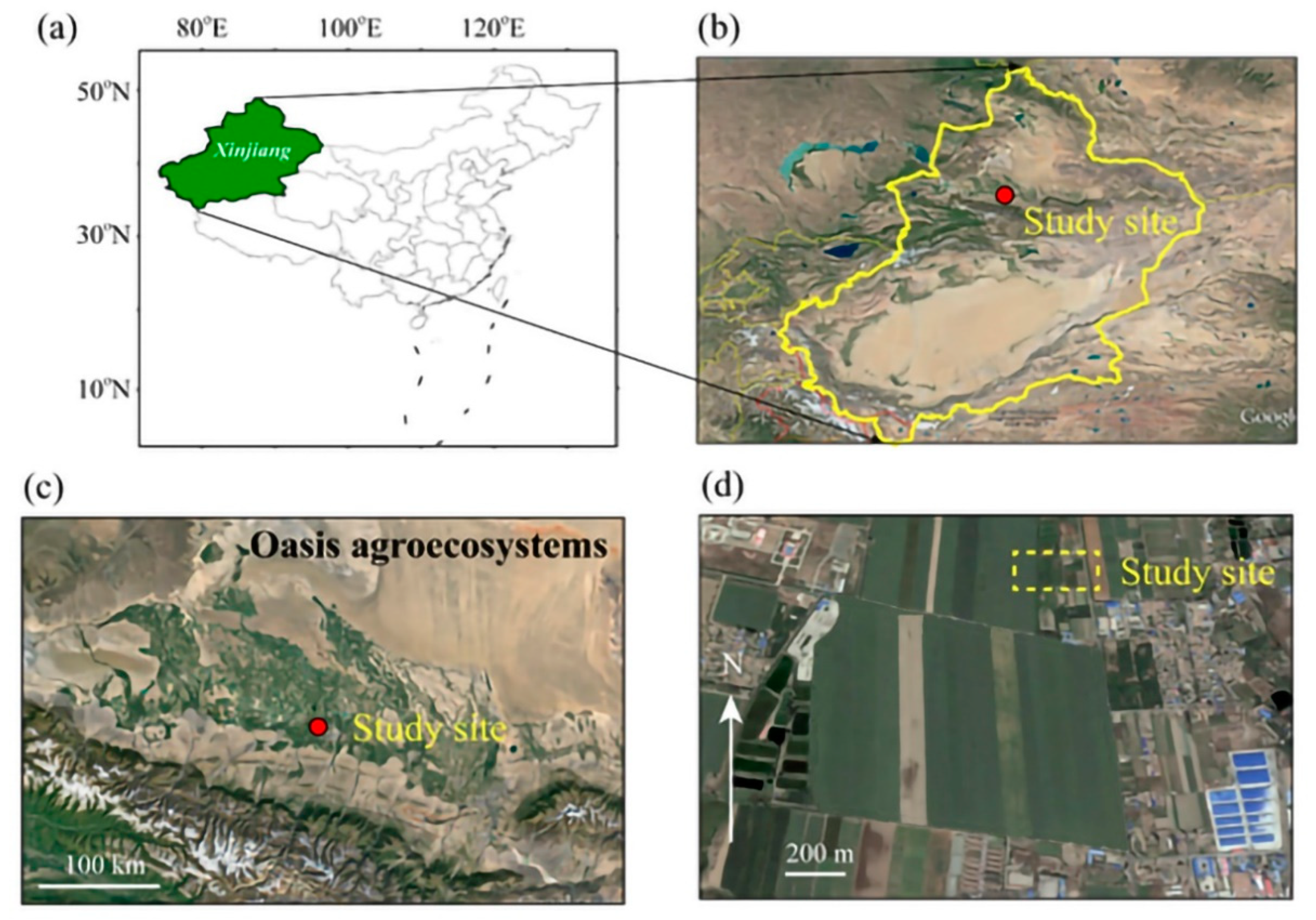 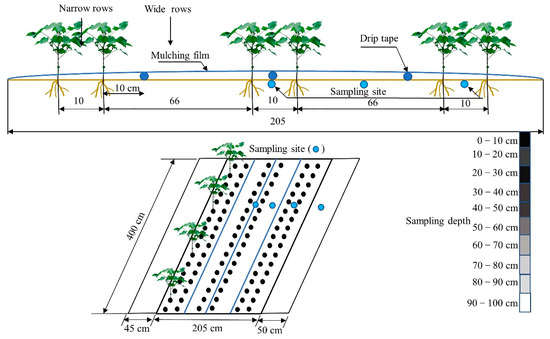 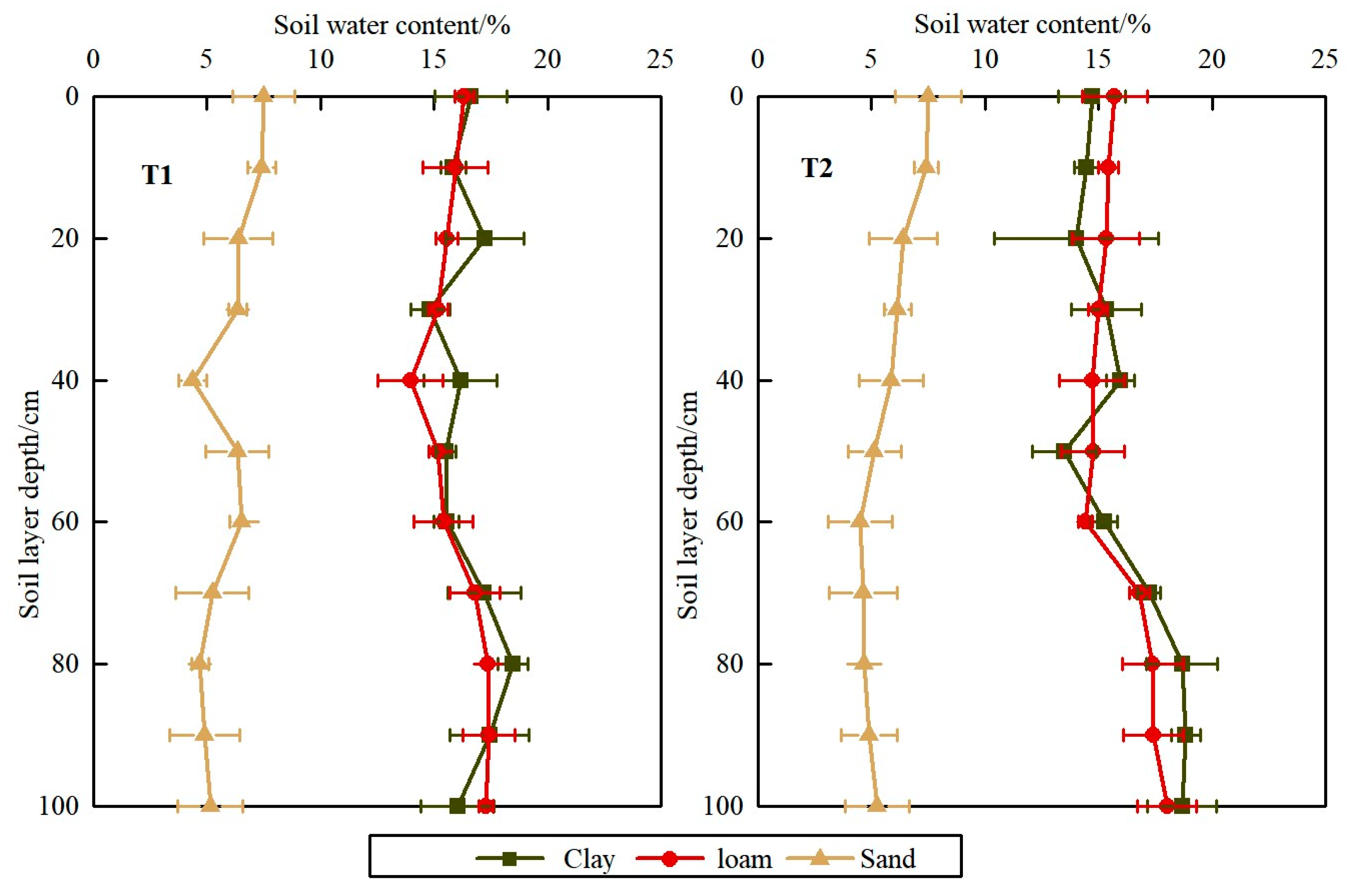 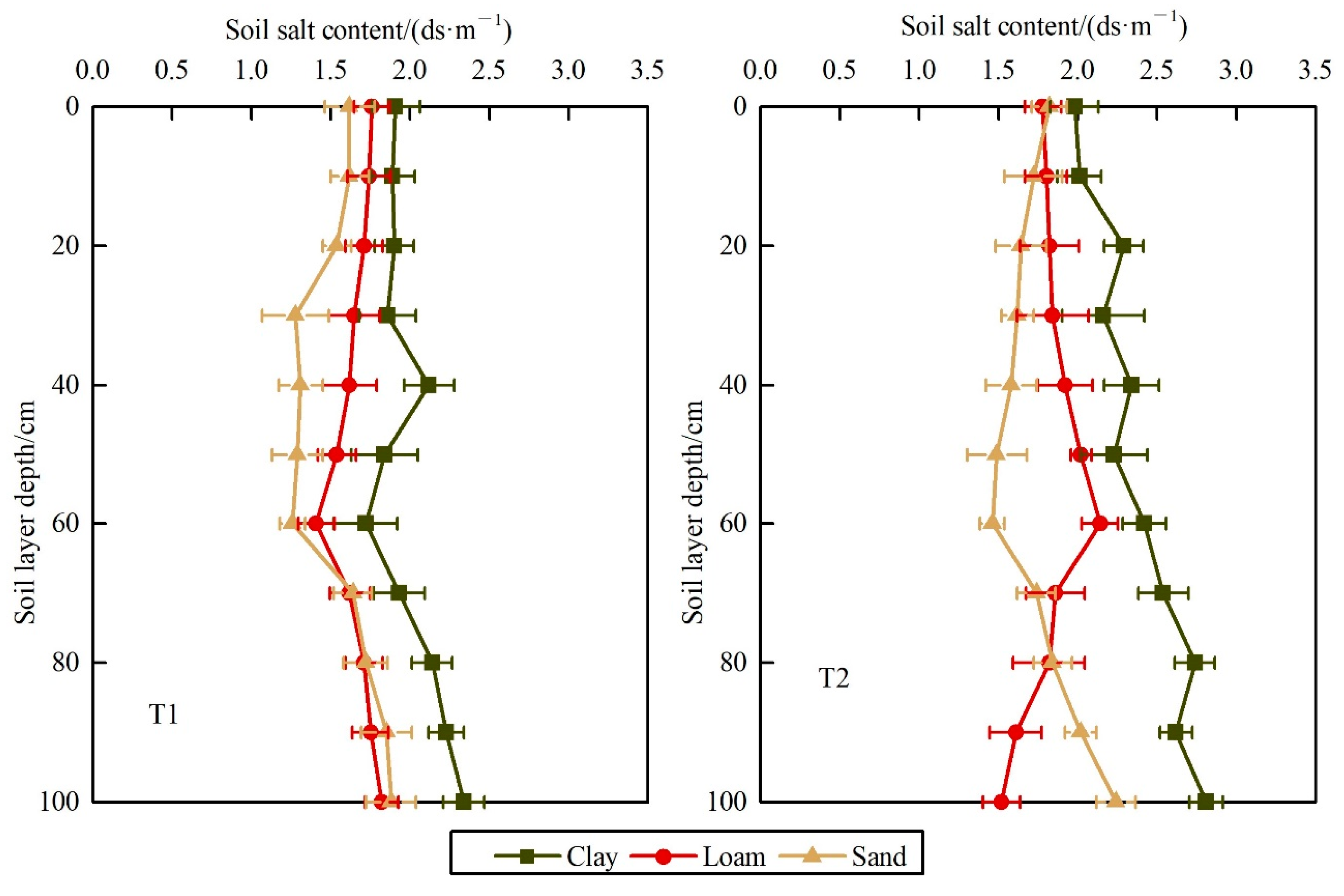 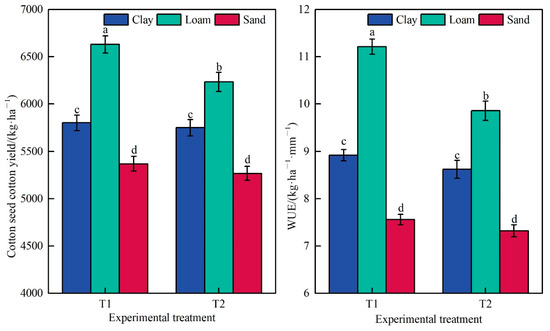 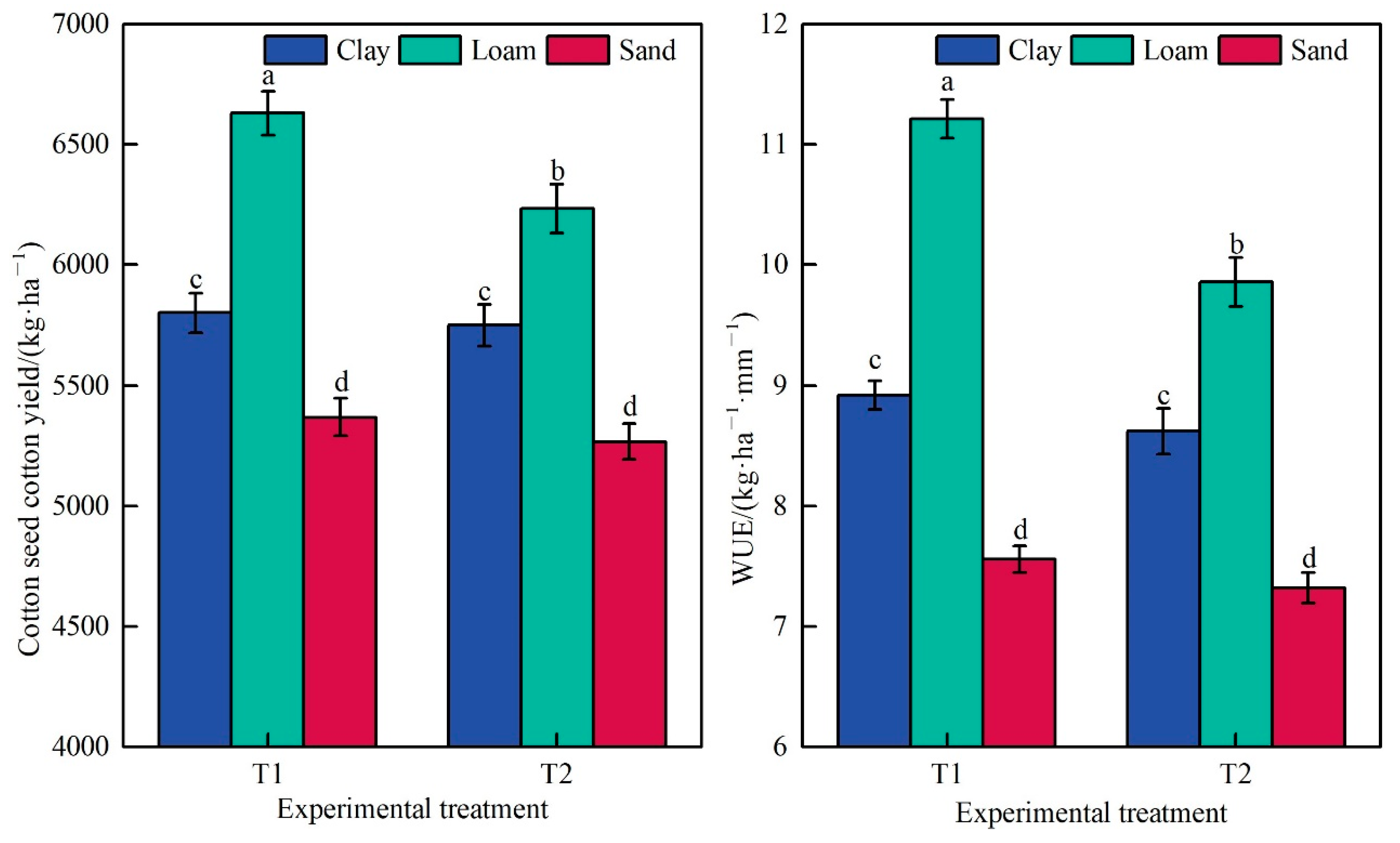