Snowmelt and Snow Sublimation in the Indus Basin

Rivers as the link between terrestrial ecosystems and oceans have been demonstrated to transport a large amount of dissolved organic carbon (DOC) to downstream ecosystems. In the source region of the Yellow River (SRYR), climate warming has resulted in the rapid retreat of glaciers and permafrost, which has raised discussion on whether DOC production will increase significantly. Here, we present three-year data of DOC concentrations in river water and precipitation, explore the deposition and transport processes of DOC from SRYR. Results show that annual mean concentrations of riverine DOC ranged from 2.03 to 2.34 mg/L, with an average of 2.21 mg/L. Its seasonal variation is characterized by the highest concentration in spring and summer (2.65 mg/L and 2.62 mg/L, respectively), followed by autumn (1.95 mg/L), and the lowest in winter (1.44 mg/L), which is closely related to changes in river runoff under the influence of precipitation and temperature. The average concentration of DOC in precipitation (2.18 mg/L) is comparable with riverine DOC, while the value is inversely related to precipitation amount and is considered to be the result of precipitation dilution. DOC deposition flux in precipitation that is affected by both precipitation amount and DOC concentration roughly was 86,080, 105,804, and 73,072 tons/year from 2013 to 2015, respectively. DOC flux delivered by the river ranged from 24,629 to 37,539 tons/year and was dominated by river discharge. Although permafrost degradation in SRYR is increasing, DOC yield is not as significant as previously assumed and is much less than other large rivers in the world. View Full-Text
Keywords: DOC; precipitation; river; source region of the Yellow River DOC; precipitation; river; source region of the Yellow River
►▼ Show Figures 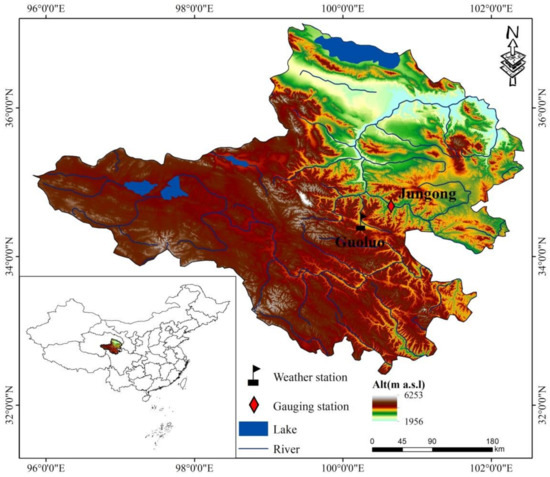