Proposal of a Laboratory-Scale Anaerobic Biodigester for Introducing the Monitoring and Sensing Techniques, as a Potential Learning Tool in the Fields of Carbon Foot-Print Reduction and Climate Change Mitigation
Previous Article in Journal

The reuse of Pteris vittata plants for multiple phytofiltration cycles is a main issue to allow an efficient phytoremediation of arsenic (As)-contaminated groundwater. Here, we assessed the capacity of phytofiltration of P. vittata plants grown for two cycles on naturally As-contaminated drinking water (collected in Central Italy), spaced by a growth cycle on non-contaminated water (N cycle). P. vittata young plants, with extensive frond and root development, were suspended individually in 15 L of water with initial As of 59 µg/L, without any additional treatment or water refilling. During cycle 1, in 45 days P. vittata plants reduced As concentration below 10 µg/L, the allowed EU limits for drinking water. During the subsequent 30 day-N cycle on non-contaminated water, no leaching of As from the roots was observed, while the water pH increased 0.9 Units, but is within the allowed limits. During cycle 2, under the same conditions as cycle 1, As concentration decreased below 10 µg/L in less than seven days. These results show that P. vittata young plants, previously used for the phytofiltration of As, do not extrude As and, when reused, remove As much more rapidly. No additional treatments were required during phytofiltration and thus this represents a sustainable, efficient, and scalable strategy. View Full-Text
Keywords: arsenic; drinking water; phytofiltration; Pteris vittata arsenic; drinking water; phytofiltration; Pteris vittata
►▼ Show Figures 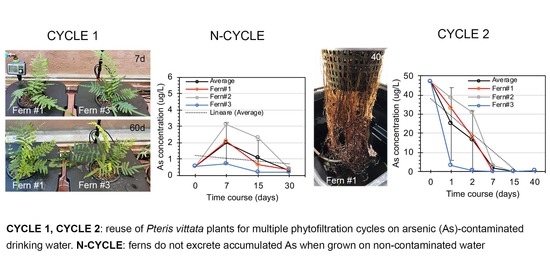 Patrizia Brunetti
Dr Patrizia Brunetti is part of the Plant Biology Research Unit of IBPM-CNR. She has expertise in the identification of the genetic and molecular bases of plant development, as well as the molecular response of different plant species to environmental stress, in particular to heavy metals and metalloids. She has studied the role of phytochelatins in heavy metals/loids tolerance and accumulation in different model species. Currently their research is focused on the study of plant species called hyperaccumulators, such as Pteris vittata, able to grow in soils and waters contaminated by arsenic, to investigate innovative and and sustainable systems to decontaminate water.
Zoom | Orient | As Lines | As Sticks | As Cartoon | As Surface | Previous Scene | Next Scene
We use cookies on our website to ensure you get the best experience. Read more about our cookies here.
Accept
We have just recently launched a new version of our website. Help us to further improve by taking part in this short 5 minute survey here. here.
Never show this again