Adding a submerged zone (SZ) is deemed to promote denitrification during dry periods and thus improve NO3− removal efficiency of a bioretention system. However, few studies had investigated the variation of nitrogen concentration in the SZ during dry periods and evaluated the effect of the variation on nitrogen removal of the bioretention system. Based on the experiment in a mesocosm bioretetion system with SZ, this study investigated the variation of nitrogen concentration of the system under 17 consecutive cycles of wet and dry alternation with varied rainfall amount, influent nitrogen concentration and antecedent dry periods (ADP). The results indicated that (1) during the dry periods, NH4+ concentrations in SZ showed an exponential decline trend, decreasing by 50% in 12.9 ± 7.3 h; while NO3− concentrations showed an inverse S-shape declining trend, decreasing by 50% in 18.8 ± 6.4 h; (2) during the wet periods, NO3− concentration in the effluent showed an S-shape upward trend; and at the early stage of the wet periods, the concentration was relatively low and significantly correlated with ADP, while the corresponding volume of the effluent was significantly correlated with the SZ depth; (3) in the whole experiment, the contribution of nitrogen decrease in SZ during dry periods to NH4+ and NO3− removal accounted for 12% and 92%, respectively; and the decrease of NO3− in SZ during the dry period was correlated with the influent concentration in the wet period and the length of the dry period. View Full-Text
Keywords: bioretention; nitrogen removal; submerged zone; alternate wet and dry conditions bioretention; nitrogen removal; submerged zone; alternate wet and dry conditions
►▼ Show Figures 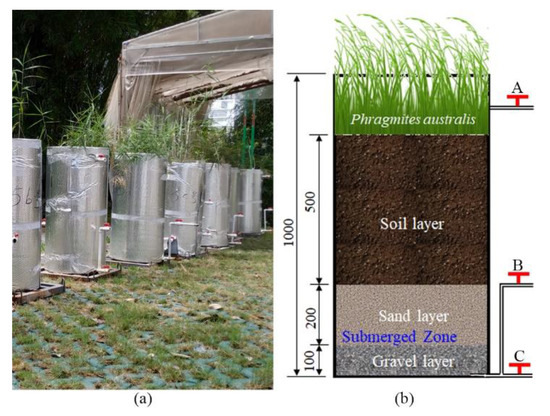