Does the Darcy–Buckingham Law Apply to Flow through Unsaturated Porous Rock?
Previous Article in Special Issue

Groundwater is an essential component of the terrestrial water cycle and a key resource for supplying water to billions of people and for sustaining domestic and economic (agricultural and industrial) activities, especially in arid and semi-arid areas. The goal of this study is to analyze the recent groundwater changes which occurred in the major North African transboundary aquifers in the beginning of the 21st century. Groundwater storage anomalies were obtained by removing soil moisture in the root zone (and surface water in the case of the Nubian Sandstone Aquifer System) from the terrestrial water storage anomalies estimated using the Gravity Recovery and Climate Experiment (GRACE) over the 2003–2016 time period. Spatio-temporal changes in groundwater storage contrast significantly among the different transboundary aquifers. Low changes (lower than 10 km3) were observed in the Tindouf Aquifer System but they were found to be highly correlated (R = 0.74) to atmospheric fluxes (precipitation minus evapotranspiration, P − ET) at annual scale. The GRACE data revealed huge water loss in the North Western Sahara and the Nubian Sandstone Aquifer Systems, above 30 km3 and around 50 km3, respectively. In the former case, the aquifer depletion can be attributed to both climate (R = 0.67 against P − ET) and water abstraction, and only to water abstraction in the latter case. The increase in water abstraction results from an increase in irrigated areas and population growth. For these two aquifers, a deceleration in the water loss observed after 2013 is likely to be attributed either to an increase in rainfall favoring rain-fed agriculture or to measures taken to reduce the over-exploitation of the groundwater resources. View Full-Text
Keywords: groundwater; transboundary aquifers; North Africa; GRACE groundwater; transboundary aquifers; North Africa; GRACE
►▼ Show Figures 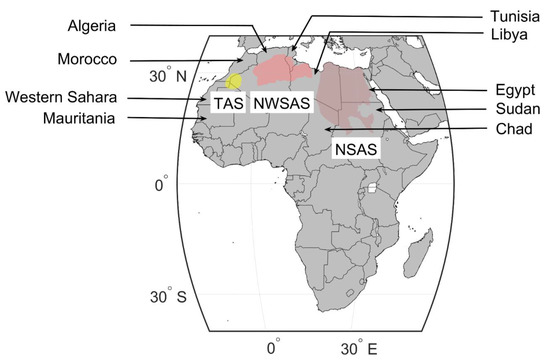