Lake Chad, the largest freshwater lake of north-central Africa and one of the largest lakes of Africa, is the relict of a giant Quaternary lake (i.e., Megalake Chad) that developed during the early- to mid-Holocene African Humid Period. Over the drylands of the Sahara Desert and the semi-arid Sahel region, remote sensing (optical satellite imagery and digital elevation models) proved a successful approach to identify the paleo-shorelines of this giant paleo-lake. Here we present the first attempt to estimate the isostatic response of the lithosphere due to Megalake Chad and its impact on the elevation of these paleo-shorelines. For this purpose, we use the open source TABOO software (University of Urbino, Italy) and test four different Earth models, considering different parameters for the lithosphere and the upper mantle, and the spatial distribution of the water mass. We make the simplification of an instantaneous drying-up of Megalake Chad, and compute the readjustment related to this instant unload. Results (i.e., duration, amplitude, and location of the deformation) are then discussed in the light of four key areas of the basin displaying prominent paleo-shoreline morpho-sedimentary features. Whatever the Earth model and simplification involved in the simulations, this work provides a strong first-order evaluation of the impact on hydro-isostasy of Megalake Chad. It demonstrates that a water body similar to this megalake would induce a significant deformation of the lithosphere in the form of a vertical differential uplift at basin-scale reaching up to 16 m in the deepest part of the paleo-lake, and its shorelines would then be deflected from 2 m (southern shorelines) to 12 m (northern shorelines), with a maximum rate of more than 1 cm y−1. As such, any future study related to the paleo-shorelines of Megalake Chad, should integrate such temporal and spatial variation of their elevations. View Full-Text
Keywords: green Sahara episode; African humid period; lithosphere; uplift; readjustment; isostasy; continental hydrosystems; remote sensing; beach ridges; TABOO post-glacial rebound calculator green Sahara episode; African humid period; lithosphere; uplift; readjustment; isostasy; continental hydrosystems; remote sensing; beach ridges; TABOO post-glacial rebound calculator
►▼ Show Figures 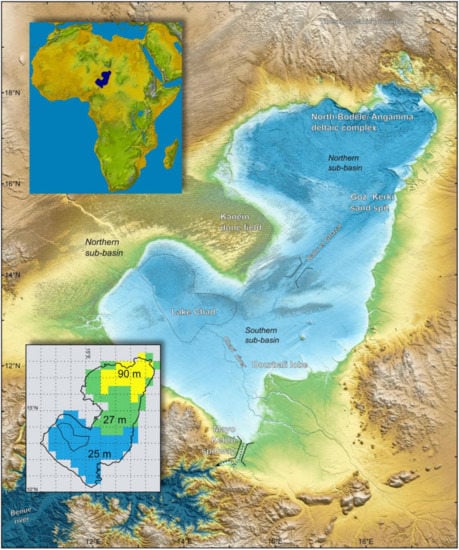