The Prairie Pothole Region (PPR) is known for its hydrologically complex landscape with a large number of pothole wetlands. However, most watershed-scale hydrologic models that are applied in this region are incapable of representing the dynamic nature of contributing area and fill-spill processes affected by pothole wetlands. The inability to simulate these processes represents a critical limitation for operators and flood forecasters and may hinder the management of large reservoirs. We used a modified version of the soil water assessment tool (SWAT) model capable of simulating the dynamics of variable contributing areas and fill-spill processes to assess the impact of climate change on upstream inflows into the Shellmouth reservoir (also called Lake of the Prairie), which is an important reservoir built to provide multiple purposes, including flood and drought mitigation. We calibrated our modified SWAT model at a daily time step using SUFI-2 algorithm within SWAT-CUP for the period 1991–2000 and validated for 2005–2014, which gave acceptable performance statistics for both the calibration (KGE = 0.70, PBIAS = −13.5) and validation (KGE = 0.70, PBIAS = 21.5) periods. We then forced the calibrated model with future climate projections using representative concentration pathways (RCPs; 4.5, 8.5) for the near (2011–2040) and middle futures (2041–2070) of multiple regional climate models (RCMs). Our modeling results suggest that climate change will lead to a two-fold increase in winter streamflow, a slight increase in summer flow, and decrease spring peak flows into the Shellmouth reservoir. Investigating the impact of climate change on the operation of the Shellmouth reservoir is critically important because climate change could present significant challenges to the operation and management of the reservoir. View Full-Text
Keywords: swat; prairie pothole region; climate change; lake of the prairie; uncertainty; sufi-2; fill-spill hydrology swat; prairie pothole region; climate change; lake of the prairie; uncertainty; sufi-2; fill-spill hydrology
►▼ Show Figures 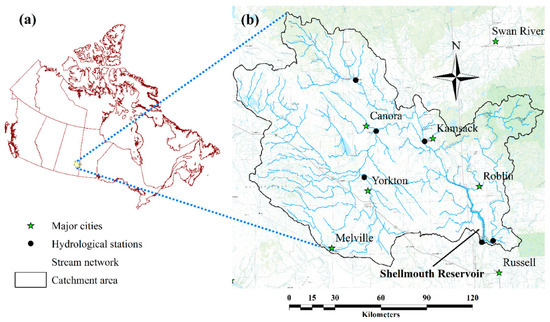