Large-scale wetland restoration often focuses on repairing the hydrologic connections degraded by anthropogenic modifications. Of these hydrologic connections, groundwater discharge is an important target, as these surface water ecosystem control points are important for thermal stability, among other ecosystem services. However, evaluating the effectiveness of the restoration activities on establishing groundwater discharge connection is often difficult over large areas and inaccessible terrain. Unoccupied aircraft systems (UAS) are now routinely used for collecting aerial imagery and creating digital surface models (DSM). Lightweight thermal infrared (TIR) sensors provide another payload option for generation of sub-meter-resolution aerial TIR orthophotos. This technology allows for the rapid and safe survey of groundwater discharge areas. Aerial TIR water-surface data were collected in March 2019 at Tidmarsh Farms, a former commercial cranberry peatland located in coastal Massachusetts, USA (41°54′17″ N 70°34′17″ W), where stream and wetland restoration actions were completed in 2016. Here, we present a 0.4 km2 georeferenced, temperature-calibrated TIR orthophoto of the area. The image represents a mosaic of nearly 900 TIR images captured by UAS in a single morning with a total flight time of 36 min and is supported by a DSM derived from UAS-visible imagery. The survey was conducted in winter to maximize temperature contrast between relatively warm groundwater and colder ambient surface environment; lower-density groundwater rises above cool surface waters and thus can be imaged by a UAS. The resulting TIR orthomosaic shows fine detail of seepage distribution and downstream influence along the several restored channel forms, which was an objective of the ecological restoration design. The restored stream channel has increased connectivity to peatland groundwater discharge, reducing the ecosystem thermal stressors. Such aerial techniques can be used to guide ecological restoration design and assess post-restoration outcomes, especially in settings where ecosystem structure and function is governed by groundwater and surface water interaction. View Full-Text
Keywords: ecological restoration; wetlands; seepage; groundwater; springs; thermal; drone; UAS ecological restoration; wetlands; seepage; groundwater; springs; thermal; drone; UAS
►▼ Show Figures 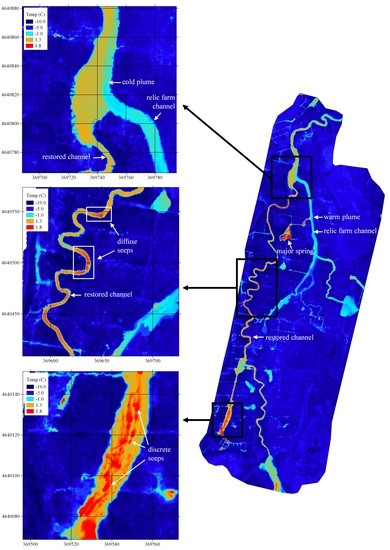