The Buffer Capacity of Riparian Vegetation to Control Water Quality in Anthropogenic Catchments from a Legally Protected Area: A Critical View over the Brazilian New Forest Code
Previous Article in Special Issue

Inactivation and Loss of Infectivity of Enterovirus 70 by Solar Irradiation

One of the most important types of emerging micropollutants is the pharmaceutical micropollutant. Pharmaceutical micropollutants are usually identified in several environmental compartments, so the removal of pharmaceutical micropollutants is a global concern. This study aimed to remove diclofenac (DCF), ibuprofen (IBP), and naproxen (NPX) from the aqueous solution via cross-linked magnetic chitosan/activated biochar (CMCAB). Two independent factors—pH (4–8) and a concentration of emerging micropollutants (0.5–3 mg/L)—were monitored in this study. Adsorbent dosage (g/L) and adsorption time (h) were fixed at 1.6 and 1.5, respectively, based on the results of preliminary experiments. At a pH of 6.0 and an initial micropollutant (MP) concentration of 2.5 mg/L, 2.41 mg/L (96.4%) of DCF, 2.47 mg/L (98.8%) of IBP, and 2.38 mg/L (95.2%) of NPX were removed. Optimization was done by an artificial neural network (ANN), which proved to be reasonable at optimizing emerging micropollutant elimination by CMCAB as indicated by the high R2 values and reasonable mean square errors (MSE). Adsorption isotherm studies indicated that both Langmuir and Freundlich isotherms were able to explain micropollutant adsorption by CMCAB. Finally, desorption tests proved that cross-linked magnetic chitosan/activated biochar might be employed for at least eight adsorption-desorption cycles. View Full-Text
Keywords: chitosan; diclofenac; ibuprofen; magnetic biochar; naproxen chitosan; diclofenac; ibuprofen; magnetic biochar; naproxen
►▼ Show Figures 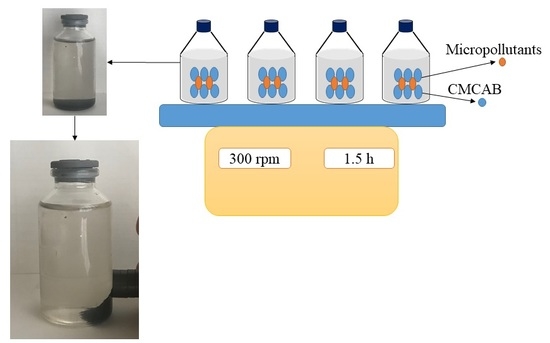