The conversion from conventional tillage (CT) to no-tillage (NT) of the soil is often suggested for positive long-term effects on several physical and hydraulic soil properties. In fact, although shortly after the conversion a worsening of the soil may occur, this transition should evolve in a progressive improvement of soil properties. Therefore, investigations aiming at evaluating the effects of NT on porous media are advisable, since such information may be relevant to better address the farmers’ choices to this specific soil conservation management strategy. In this investigation, innovative and standard methods were applied to compare CT and NT on two farms where the conversion took place 6 or 24 years ago, respectively. Regardless of the investigated farm, results showed negligible differences in cumulative infiltration or infiltration rate, soil sorptivity, saturated hydraulic conductivity, conductive pores size, or hydraulic conductivity functions. Since relatively small discrepancies were also highlighted in terms of bulk density or soil organic carbon, it was possible to conclude that NT did not have a negative impact on the main physical and hydraulic properties of investigated clay soils. However, a significantly higher number of small pores was detected under long-term NT compared to CT, so we concluded that the former soil was a more conductive pore system, i.e., consisting of numerous relatively smaller pores but continuous and better interconnected. Based on measured capacity-based indicators (macroporosity, air capacity, relative field capacity, plant available water capacity), NT always showed a more appropriate proportion of water and air in the soil. View Full-Text
Keywords: BEST-procedure; soil hydraulic conductivity; capacity-based soil indicators; conventional tillage; no-tillage; durum wheat BEST-procedure; soil hydraulic conductivity; capacity-based soil indicators; conventional tillage; no-tillage; durum wheat
►▼ Show Figures 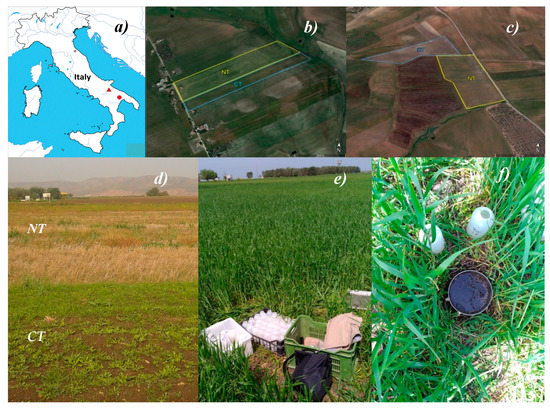