Effects of a Large Irrigation Reservoir on Aquatic and Riparian Plants: A History of Survival and Loss

Invasive species are among the top five causes of biodiversity loss worldwide. Arundo donax has progressively colonized the riparian zones of Mediterranean rivers with detrimental effects on terrestrial and aquatic biodiversity, being catalogued as one of the 100 worst invasive species. In order to control this invasive species and restore native riparian vegetation, different methods have been traditionally used, depending on the environmental, economic and social context. Here, the effect of repeated above-ground removal of A. donax on aquatic and terrestrial communities was assessed by testing two different frequencies of mowing (monthly-intensive and quarterly-extensive), combined with the plantation of native species. Specifically, it was evaluated if riparian vegetation, birds and aquatic macroinvertebrates showed significant responses throughout time and between restoration treatments based on 4-year annual biomonitoring data (2015–2018). Changes in taxonomic diversity and ecological quality indices for the different biological communities were tested using mixed-effect models (LMEs). Similarly, comparisons between restored and reference sites were also performed. LMEs were also applied to assess how riparian variables were related to bird and aquatic macroinvertebrate indices. NMDS and MGLM-Mvabund analyses were performed to detect significant post-treatment differences in taxa composition compared to the initial state and reference sites. During this short-term assessment, increases in riparian and aquatic macroinvertebrate richness and quality indices were found, as well as significant decreases in A. donax height, density and cover, without significant differences between restoration treatments. However, differential effects between extensive (positive-neutral effect) and intensive treatments (neutral-negative effect) were detected for bird richness, density and abundance. After three years of restoration actions, restored sites are still far from reference values in terms of taxa composition, species richness and ecological quality, especially for riparian vegetation and birds. Given the high cost and the great efforts required for restoration, extensive repeated mowing, together with native species plantation, are only recommended on river reaches not fully invaded by A. donax and with a high ecological interest. View Full-Text
Keywords: ecological restoration; biomonitoring; riparian vegetation; macroinvertebrates; birds; biological invasion; alien species; environmental management; Mediterranean rivers; Segura River ecological restoration; biomonitoring; riparian vegetation; macroinvertebrates; birds; biological invasion; alien species; environmental management; Mediterranean rivers; Segura River
►▼ Show Figures 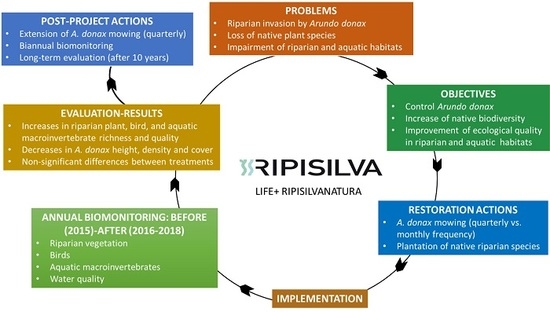