The geometry of hillslopes (plan and profile) affects soil erosion under rainfall-runoff processes. This issue comprises of several factors, which must be identified and assessed if efficient control measures are to be designed. The main aim of the current research was to investigate the impact of surface Roughness Coefficients (RCs) and Complex Hillslopes (CHs) on runoff variables viz. time of generation, time of concentration, and peak discharge value. A total of 81 experiments were conducted with a rainfall intensity of 7 L min−1 on three types of soils with different RCs (i.e., low = 0.015, medium = 0.016, and high = 0.018) and CHs (i.e., profile curvature and plan shape). An inclination of 20% was used for three replications. The results indicate a significant difference (p-value ≤ 0.001) in the above-mentioned runoff variables under different RCs and CHs. Our investigation of the combined effects of RCs and CHs on the runoff variables shows that the plan and profile impacts are consistent with a variation in RC. This can implicate that at low RC, the effect of the plan shape (i.e., convergent) on runoff variables increases but at high RC, the impact of the profile curvature overcomes the plan shapes and the profile curvature’s changes become the criteria for changing the behavior of the runoff variables. The lowest mean values of runoff generation and time of concentration were obtained in the convex-convergent and the convex-divergent at 1.15 min and 2.68 min, respectively, for the soil with an RC of 0.015. The highest mean of peak discharge was obtained in the concave-divergent CH in the soil with an RC of 0.018. We conclude that these results can be useful in order to design planned soil erosion control measures where the soil roughness and slope morphology play a key role in activating runoff generation. View Full-Text
Keywords: rainfall-runoff processes; soil erosion; hillslope morphology; surface flow; roughness rainfall-runoff processes; soil erosion; hillslope morphology; surface flow; roughness
►▼ Show Figures 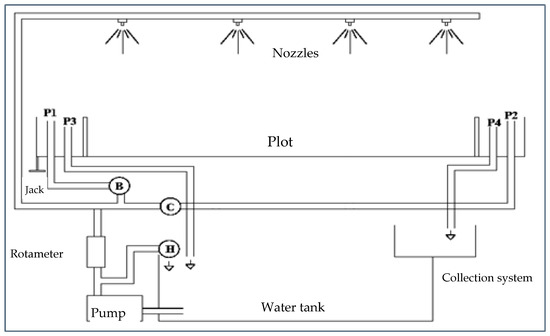