Mongolia is a semi-arid, highly continental region with highly variable precipitation and river discharge. The groundwater aquifer located near Ulaanbaatar, the capital city of Mongolia, is the only one source for city water supply consumption, and it is important to ensure that groundwater is available now and in the future. The main watercourse near the capital city is the Tuul River, fed by precipitation in the Khentii Mountains. The semi-arid and cold environment shows high variability in precipitation and river discharge. However, due to absence of precipitation in winter and spring, the riverbed usually runs dry during these times of the year, and weather observations show that the dry period has been extending in recent years. However, in parallel with urban development, the extended groundwater aquifer has shown a clear decline, and the groundwater levels have dropped significantly. Therefore, a groundwater management system based on managed aquifer recharge is proposed, and a strategy to implement these measures in the Tuul River valley is presented in this paper. This strategy consists of the enhancement of natural recharge rates during the wet summer from the northern drainage canal, an additional increase in groundwater recharge through melting the ice storage in the dry period, as well as the construction of underground dams to accumulate groundwater and a surface water reservoir that releases a constant discharge in the outlet. To increase natural recharge rates of groundwater during the early dry period through the melting ice storage period, the MATLAB icing code, which was written for ice storage for limited and unlimited areas, was considered through finite element subsurface FLOW (FEFLOW) simulation scenarios as a water source in ice form on the surface. A study of the artificial permafrost of underground as an ice dam was processed in FEFLOW simulation scenarios for accumulating groundwater resources. The results of these artificial recharging methods were individually calculated, combined, and compared with the surface reservoir, which releases a constant discharge through the dam. In this paper, new ideas are presented involving managed aquifer recharge—MAR methods, and include application to aufeis, a mass of layered ice for groundwater recharge by melting. Additionally, the accumulation of groundwater using artificial permafrost is used as an underground dam. In addition, was considered recharging scenario only with constant release water amount from water reservoir also with all MAR methods together with reservoir combination. View Full-Text
Keywords: Ulaanbaatar; MAR; MATLAB; FEFLOW; artificial recharging scenarios Ulaanbaatar; MAR; MATLAB; FEFLOW; artificial recharging scenarios
►▼ Show Figures 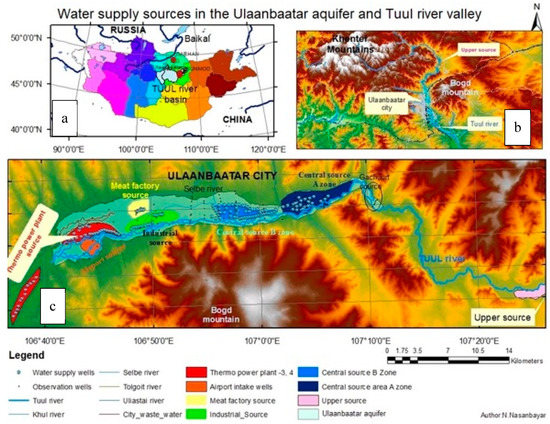