Arsenic (As) contamination of groundwater is commonly remediated by pump and treat. However, this technique is difficult to apply or maintain efficiently because the mobility of arsenic varies depending on the geochemical aquifer conditions. Arsenic interacting with the sediment can cause strong retardation, which is counteracted by ions competing for sedimentary sorption sites like silica, bicarbonate and phosphate. Phosphate competes most effectively with arsenic for sorption sites due to its chemical similarity. To accelerate an ongoing but ineffective pump and treat remediation, we examined the competitive effect of increasing phosphate doses on contaminated aquifer material of different depths and thus under distinct geochemical conditions. In the columns with phosphate addition, significant amounts of arsenic were released rapidly under oxic and anoxic conditions. In all tests, the grade of leaching was higher under anoxic conditions than under oxic conditions. As(III) was the dominant species, in particular during the first release peaks and the anoxic tests. Higher amounts of phosphate did not trigger the arsenic release further and led to a shift of arsenic species. We suggest that the competitive surface complexation is the major process of arsenic release especially when higher amounts of phosphate are used. Commonly arsenic release is described at iron reducing conditions. In contrast, we observed that a change in prevailing redox potential towards manganese reducing conditions in the oxic tests and iron reducing conditions in the anoxic column took place later and thus independently of arsenic release. The reduction of As(V) to As(III) under both redox conditions is presumed to be an effect of microbial detoxification. A loss of sulphate in all columns with phosphate indicates an increased microbial activity, which might play a significant role in the process of arsenic release. Preliminary tests with sediment material from a contaminated site showed that phosphate additions did not change the pH value significantly. Therefore, a release of other metals is not likely. Our results indicate that in-situ application of phosphate amendments to arsenic-contaminated sites could accelerate and enhance arsenic mobility to improve the efficiency of pump and treat remediation without negative side effects. The novelty of this approach is the use of only small amounts of phosphate in order to stimulate microbial activity in addition to surface complexation. Therefore, this method might become an innovative and cost-effective remediation for arsenic contaminated sites. View Full-Text
Keywords: arsenic; phosphate; competitive surface complexes; release; mobility; remediation arsenic; phosphate; competitive surface complexes; release; mobility; remediation
►▼ Show Figures 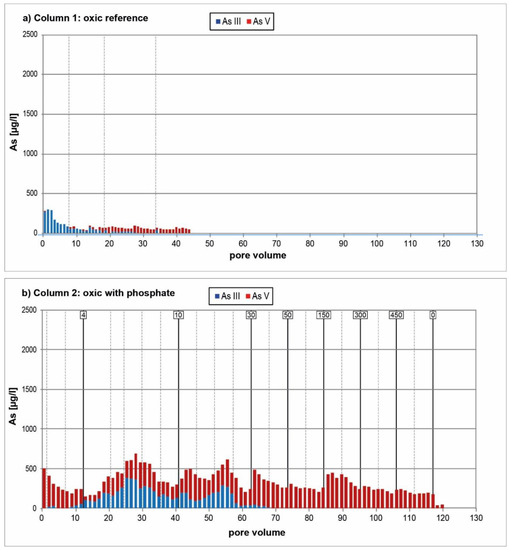