Fluvial transport is a natural process that shapes riverbeds and the surrounding terrain surface, particularly in mountainous areas. Since the traditional techniques used for fluvial transport investigation provide only limited information about the bed load transport, recently, laser scanning technology has been increasingly incorporated into research to investigate this issue in depth. In this study, a terrestrial laser scanning technique was used to investigate the transport of individual boulders. The measurements were carried out annually from 2011 to 2016 on the Łomniczka River, which is a medium-sized mountain stream. The main goal of this research was to detect and determine displacements of the biggest particles in the mountain riverbed. The methodology was divided into two steps. First, the change zones were detected using two strategies. The first strategy was based on differential digital elevation model (DEM) creation and the second involved the calculation of differences between point clouds instead of DEMs. The experiments show that the second strategy was more efficient. In the second step, the displacements of the boulders were determined based on the detected areas of change. Using the proposed methodology, displacements for individual stones in each year were determined. Most of the changes took place in 2012–2014, which correlates well with the hydrological observations. During the six-year period, movements of individual particles with diameters less than 0.8 m were observed. Maximal displacements in the observed period reached 3 m. Therefore, it is possible to determine both vertical and horizontal displacement in the riverbed using multitemporal TLS. View Full-Text
Keywords: terrestrial laser scanning; fluvial geomorphology; mountain river; bed load transport; change detection terrestrial laser scanning; fluvial geomorphology; mountain river; bed load transport; change detection
►▼ Show Figures 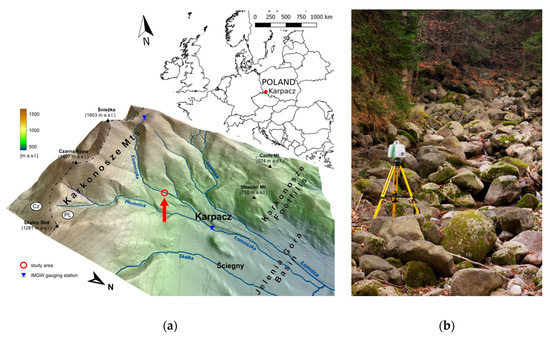