Heterogeneity and Anthropogenic Impacts on a Small Lowland Stream

During our work, we investigated the physical and chemical variables of a small surface watercourse to investigate how different anthropogenic effects affect its water quality. Along this small watercourse, there are well-separated areas that are affected by various anthropogenic effects. In addition to its origin and branches, in many places it is surrounded by agricultural land with insufficient buffer zones, which burdens the small watercourse with nitrogen and phosphorus forms. In the lower stages, artificial damming inhibits the natural flow of the Tócó Canal, thereby creating eutrophicated stagnant water areas. This is further strengthened by, in many cases, illegal communal and used water intake that further burdens the small watercourse. Considering the experience of our investigation, it can be stated that the examined small watercourse could barely suffer human impacts, and it could be described with great heterogeneity using physical and chemical variables. We experienced that this heterogeneity caused by anthropogenic effects appeared in all hydrologic states and seasons. Furthermore, our research showed that these small watercourses had such high heterogeneity that their monitoring and examination should be taken just as seriously as when it comes to larger watercourses. View Full-Text
Keywords: urban water; anthropogenic impacts; land use; small lowland stream; physical–chemical variables; EU Water Framework Directive urban water; anthropogenic impacts; land use; small lowland stream; physical–chemical variables; EU Water Framework Directive
►▼ Show Figures 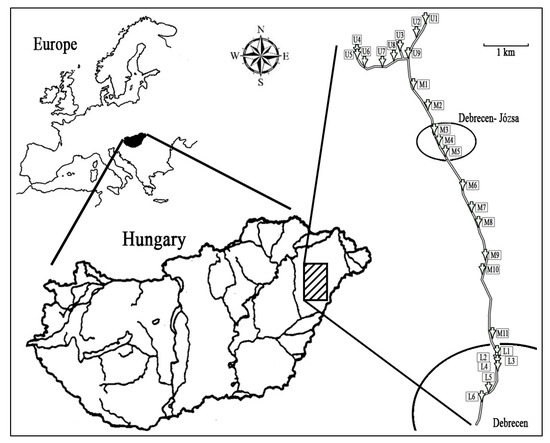