While traditional soil water sensors measure soil water content (SWC) at point scale, the actively heated fiber-optics (AHFO) sensor measures the SWC at field scale. This study compared the performance of a distributed (e.g., AHFO) and a point-based sensor on closing the field water balance and estimating the evapotranspiration (ET). Both sensors failed to close the water balance and produced larger errors in estimated ET (ETε), particularly for longer time periods with >60 mm change in soil water storage (ΔSWS), and this was attributed to a lack of SWC measurements from deeper layers (>0.24 m). Performance of the two sensors was different when only the periods of ˂60 mm ΔSWS were considered; significantly lower residual of the water balance (Re) and ETε of the distributed sensor showed that it could capture the small-scale spatial variability of SWC that the point-based sensor missed during wet (70–104 mm SWS) periods of ˂60 mm ΔSWS. Overall, this study showed the potential of the distributed sensor to provide a more accurate value of SWS at field scale and to reduce the errors in water balance for shorter wet periods. It is suggested to include SWC measurements from deeper layers to better evaluate the performance of the distributed sensor, especially for longer time periods of >60 mm ΔSWS, in future studies. View Full-Text
Keywords: soil water balance; actively heated fiber-optics; soil water storage soil water balance; actively heated fiber-optics; soil water storage
►▼ Show Figures 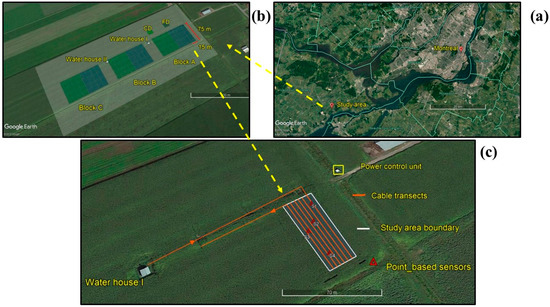