Assessment of Changes in Water Balance Components under 1.5 °C and 2.0 °C Global Warming in Transitional Climate Basin by Multi-RCPs and Multi-GCMs Approach
Next Article in Special Issue

Surface soil structure is sensitive to natural and anthropogenic impacts that alter soil hydraulic properties (SHP). These alterations have distinct consequences on the water cycle. In this review, we summarized published findings on the quantitative effects of different agricultural management practices on SHP and the subsequent response of the water balance components. Generally, immediately after tillage, soils show a high abundance of large pores, which are temporally unstable and collapse due to environmental factors like rainfall. Nevertheless, most hydrological modeling studies consider SHP as temporally constant when predicting the flow of water and solutes in the atmosphere-plant-soil system. There have been some developments in mathematical approaches to capture the temporal dynamics of soil pore space. We applied one such pore evolution model to two datasets to evaluate its suitability to predict soil pore space dynamics after disturbance. Lack of knowledge on how dispersion of pore size distribution behaves after tillage may have led to over-estimation of some values predicted by the model. Nevertheless, we found that the model predicted the evolution of soil pore space reasonably well (r2 > 0.80 in most cases). The limiting factor to efficiently calibrate and apply such modeling tools is not in the theoretical part but rather the lack of adequate soil structural and hydrologic data. View Full-Text
Keywords: temporal dynamics; soil hydraulic properties; soil structure; tillage effects; pore size distribution temporal dynamics; soil hydraulic properties; soil structure; tillage effects; pore size distribution
►▼ Show Figures 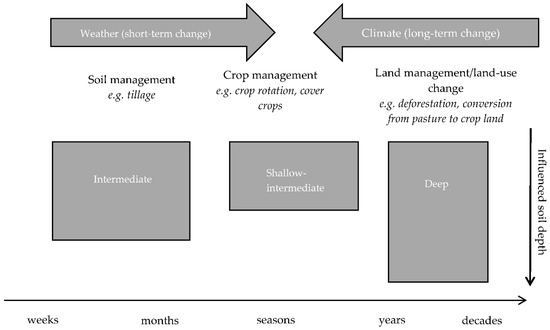