Expected Changes of Montenegrin Climate, Impact on the Establishment and Spread of the Asian Tiger Mosquito (Aedes albopictus), and Validation of the Model and Model-Based Field Sampling

The aim of this research is to present a weather-based forecasting system for apple fire blight (Erwinia amylovora) and downy mildew of grapevine (Plasmopara viticola) under Serbian agroecological conditions and test its efficacy. The weather-based forecasting system contains Numerical Weather Prediction (NWP) model outputs and a disease occurrence model. The weather forecast used is a product of the high-resolution forecast (HRES) atmospheric model by the European Centre for Medium-Range Weather Forecasts (ECMWF). For disease modelling, we selected a biometeorological system for messages on the occurrence of diseases in fruits and vines (BAHUS) because it contains both diseases with well-known and tested algorithms. Several comparisons were made: (1) forecasted variables for the fifth day are compared against measurements from the agrometeorological network at seven locations for three months (March, April, and May) in the period 2012–2018 to determine forecast efficacy; (2) BAHUS runs driven with observed and forecast meteorology were compared to test the impact of forecasted meteorological data; and (3) BAHUS runs were compared with field disease observations to estimate system efficacy in plant disease forecasts. The BAHUS runs with forecasted and observed meteorology were in good agreement. The results obtained encourage further development, with the goal of fully utilizing this weather-based forecasting system. View Full-Text
Keywords: fire blight; downy mildew; disease modelling; numerical weather prediction fire blight; downy mildew; disease modelling; numerical weather prediction
►▼ Show Figures 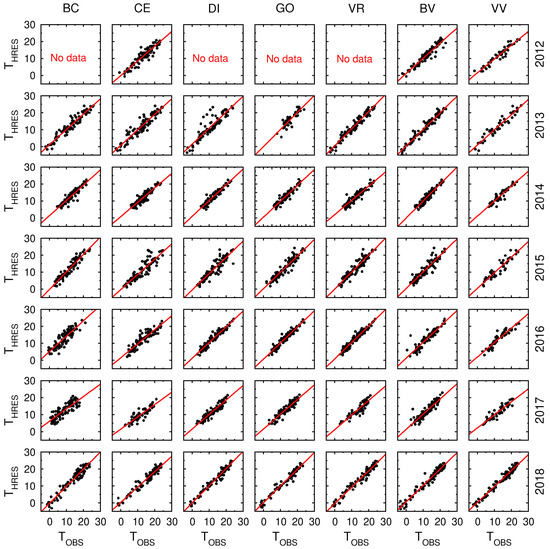