Constructive interference of lightning-generated signals in the extremely low frequency (ELF) below 100 Hz is the source of a global electromagnetic phenomenon in the Earth’s atmosphere known as Schumann Resonances (SR). SR are excited at frequencies of 7.8, 14, 20, 26, … Hz, and their diurnal and seasonal intensity variations are largely dependent on changes in the location and magnitude of the major lightning centres in Southeast Asia, Africa, and South America. In the last five decades, extensive research has focused on reconstructing the spatial and temporal evolution in global lighting activity using SR measurements, and more recently on analysing the links to climate change, transient luminous events (TLE), and biological systems. In this study, a quasi-electrostatic antenna, primarily designed as a thunderstorm warning system, is for the first time applied to measure background variability in the SR band at an urban site in Southwest England. Data collected continuously from June 2015 for a 5-year period are suitably filtered and analysed showing that SR is the dominant contribution to the fair-weather displacement current measured by the sensor in the band 10–45 Hz. Diurnal and seasonal signal amplitude variations have been found to be consistent with previous studies and show the African-European lightning centre to prevail due to the shorter source-observer distance. Also, it is shown that long-term global changes in the ocean and land temperature, and the subsequent effect on the major lightning hotspots, may be responsible for the inter-annual variability of SR intensity, indicating that the largest increase occurred during the 2015–2016 super El-Niño episode. View Full-Text
Keywords: Schumann resonance; lightning; atmospheric electricity; climate change; El-Niño; BTD-300 Schumann resonance; lightning; atmospheric electricity; climate change; El-Niño; BTD-300
►▼ Show Figures 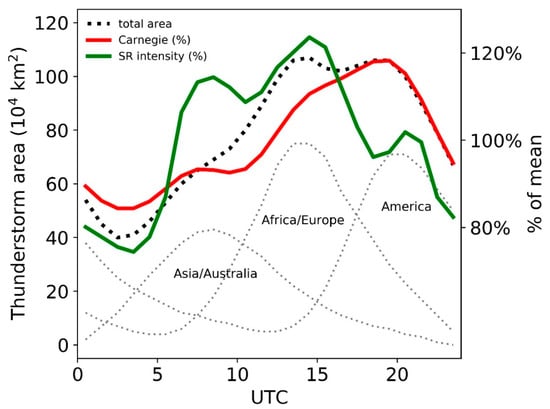