Climate Perspectives in the Intra–Americas Seas

The Intra–Americas Seas region is known for its relevance to air–sea interaction processes, the contrast between large water masses and a relatively small continental area, and the occurrence of extreme events. The differing weather systems and the influence of variability at different spatio–temporal scales is a characteristic feature of the region. The impact of hydro–meteorological extreme events has played a huge importance for regional livelihood, having a mostly negative impact on socioeconomics. The frequency and intensity of heavy rainfall events and droughts are often discussed in terms of their impact on economic activities and access to water. Furthermore, future climate projections suggest that warming scenarios are likely to increase the frequency and intensity of extreme events, which poses a major threat to vulnerable communities. In a region where the economy is largely dependent on agriculture and the population is exposed to the impact of extremes, understanding the climate system is key to informed policymaking and management plans. A wealth of knowledge has been published on regional weather and climate, with a majority of studies focusing on specific components of the system. This study aims to provide an integral overview of regional weather and climate suitable for a wider community. Following the presentation of the general features of the region, a large scale is introduced outlining the main structures that affect regional climate. The most relevant climate features are briefly described, focusing on sea surface temperature, low–level circulation, and rainfall patterns. The impact of climate variability at the intra–seasonal, inter–annual, decadal, and multi–decadal scales is discussed. Climate change is considered in the regional context, based on current knowledge for natural and anthropogenic climate change. The present challenges in regional weather and climate studies have also been included in the concluding sections of this review. The overarching aim of this work is to leverage information that may be transferred efficiently to support decision–making processes and provide a solid foundation on regional weather and climate for professionals from different backgrounds. View Full-Text
Keywords: climate change; cyclones; drought; ENSO; IAS; moisture transport; rainfall; SST climate change; cyclones; drought; ENSO; IAS; moisture transport; rainfall; SST
►▼ Show Figures 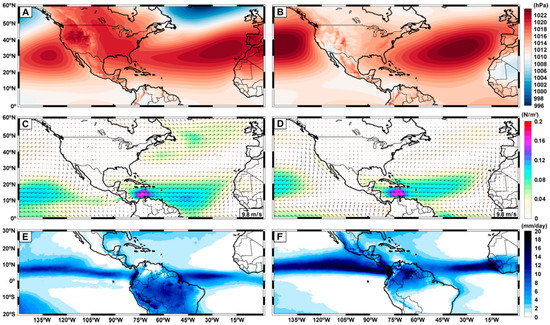