The Polar Vortex and Extreme Weather: The Beast from the East in Winter 2018

Public attention has recently focused on high-impact extreme weather events in midlatitudes that originate in the sub-Arctic. We investigate movements of the stratospheric polar vortex (SPV) and related changes in lower atmospheric circulation during the February-March 2018 “Beast from the East” cold winter event that dramatically affected much of Europe and north-central North America. This study demonstrates that the movement of the SPV is a key linkage in late winter subarctic and northern midlatitude extreme weather events. February–March 2018 saw two types of subarctic-midlatitude weather connections. In the first type, the SPV was displaced from the pole to lower latitudes over North America in February and then was found over northern Siberia in March. Mid-February and mid-March are examples of persistent near vertically aligned geopotential height structures of the atmospheric circulation. These structures over North America and Eurasia advected cold Arctic air southward. The second type of cold surface event was associated with a weak regional SPV and a sudden stratospheric warming event over Europe during the second half of February. These late winter linkage events that arise through dynamic instabilities of the SPV are more common in the last decade, but the potential role of enhanced Arctic amplification is uncertain.
Keywords: polar vortex; Arctic; severe weather; potential vorticity polar vortex; Arctic; severe weather; potential vorticity

In the Northern Hemisphere winter, a stratospheric polar vortex (SPV) develops over the North Pole, with strong zonal westerlies circulating around low temperatures at the center of the vortex [1]. Impacts of SPV events are not confined to the stratosphere. Dynamical coupling with the troposphere can cause an eddy-driven jet stream shift southward and result in extreme weather over parts of Eurasia and North America [2]. Although the SPV is typically thought of as being centered on the Arctic, in reality its center is often found in the subarctic, over northern Canada or northern Eurasia. During January–February 1979–2018, SPVs at 100 hPa were found approximately 40% of the time over the North American side and 25% over the Siberian side [3]. Although continental cold air outbreaks can occur without a SPV connection, a southward-shifted SPV is often associated with severe surface weather, cold temperatures anomalies, snow and record storms and rainfall that arise from the tropospheric polar jet moving equatorward and a weakening jet stream [2,3,4,5,6]. Such examples were found in February and March 2018. A SPV located over North America in February contributed to extreme low temperatures to the northern plains, and allowed high surface pressure with low temperatures to develop over Central Europe that moved westward over the United Kingdom and as far south as Italy [7]. In March, the center of the SPV relocated over Eurasia and was associated with cold air advection over Europe. Both European events have been referred to as “the Beast from the East” but they were associated with different synoptic situations, as we demonstrate.
As the SPV has a major role as a linkage in late winter subarctic and northern midlatitude extreme weather events [5,8,9], a closer examination of February–March, 2018, as a case study is in order.

The movement of the SPV over North America in February 2018 set up a tropospheric ridge/trough height field with cold temperatures over Central and Eastern Canada and the United States [5]. This persisted for most of February and was particularly evident in the second half of the month. The 850 hPa tropospheric vortex is co-located under the SPV center near Hudson Bay (Figure 1A and Figure 4). Cold temperature anomalies of <−8 °C reached well into the United States Midwest and were associated with strong cold air advection from the Arctic between the ridge over Alaska and the tropospheric vortex center.
The late-February European case is more complex [3]. While the main SPV was located over North America, it was nearly nonexistent over Europe (Figure 1A and Figure 2A); this allowed a region of tropospheric high pressure to build over Eurasia and spread westward over Northern Scandinavia and the Barents Sea associated with an anomalous weak SPV over Europe (Figure 1A and Figure 5). Cold air spread from Russia to the United Kingdom with snow falling as far south as Rome. Helsinki’s low temperatures of below −14 °C persisted for more than a week (Figure 6), while on 1 March many UK locations recorded their coldest March day in many decades [31], as the “Beast from the East” took hold. Several authors have noted in similar SSW cases that the persistence of the atmospheric structure was prolonged due to tropospheric/stratospheric interactions in both directions [6,20,32].
By mid-March the SPV was firmly over Eurasia (Figure 1D and Figure 2B). The stratospheric/tropospheric vortex connection was established and high pressure developed over the Atlantic (Figure 7). This pattern gave cold air advection from the Arctic over Europe. The cold event at Helsinki around day 80 (20 March) was not as pronounced as that in late February, as the region of coldest air was smaller and its movement was more progressive across Western Europe.
Although the stratospheric forcing on the evolution of surface weather location and intensity in February–March 2018 appears robust, we cannot exclude the potential role of other forcing factors. Although daily extremes of GBI and NAO occurred, February and March, 2018, were not exceptional in terms of monthly mean values of AO, NAO, and GBI. However, in 2018 the Tropical/Northern Hemisphere (TNH) pattern [33] reached its highest February mean value in the record starting from 1950, calculated by the NOAA Climate Prediction Centre [34]. A comparison of the three Februaries with largest monthly mean TNH values (2018, 1964, 2003) did not reveal a systematic spatial pattern of Northern Hemisphere surface air temperature anomalies.
In March 2018, the East Atlantic/West Russia (EA–WR) pattern [35,36] obtained its record-high value. The record-low March value of EA–WR occurred in 1970. The surface temperature anomalies showed similarities between 1970 and 2018: cold in Central Europe and Siberia, and warm in Alaska and Labrador–Southern Greenland region. Hence, although the study period was characterized by extreme values of TNH and EA–WR, we found no evidence of their having a major role for the “Beast from the East”.

There is considerable public interest on extreme weather events in midlatitudes that have a connection to the subarctic. Such events have been more frequent in the last decade [3,4,5], but to what degree that they are caused by recent changes in Arctic amplification is an open question [37]. A delay of sea ice formation during early winter in the Barents and Chukchi Seas is a potential forcing mechanism of the beginning of 2018 “Beast from the East” cold-air event and analogous events, but there is controversy about causality in the atmospheric community [9]. Other possible remote drivers of the closely-related SSW include mid-/high-latitude blocking and the Madden–Julian Oscillation [14]. The main dynamic factors for the “Beast from the East” severe weather were, however, internal variability of the SPV and tropospheric connections.
Late in winter there often is a subarctic-midlatitude weather connection related to the dynamics of the SPV. February–March 2018, show two types of connections. Mid-February and late-March are examples of vertically coherent geopotential height structures related to the displacement of the SPV over the two continents, and advection of cold Arctic air southward. The second type was exemplified after the SSW event of 12 February, 2018, in a region of weakened SPV over Northern Europe. These case studies show linkages between the Arctic SPV and midlatitude extreme weather based on internal variability of the polar atmosphere.

This paper has support of the Arctic Research Program of the NOAA Global Ocean Monitoring and Observing Office. This is PMEL Contribution 5094. This publication is partially funded by the Joint Institute for the Study of the Atmosphere and Ocean (JISAO) under NOAA Cooperative Agreement NA15OAR4320063, contribution number 2020–1069, the Department of Energy (Grant DE-SC0020640), and the Academy of Finland (contracts 317999 and 319397).

We thank Will Seviour for making the vortex moments diagnostic code available. Data were obtained from widely available reanalysis data sets and software as noted by references. 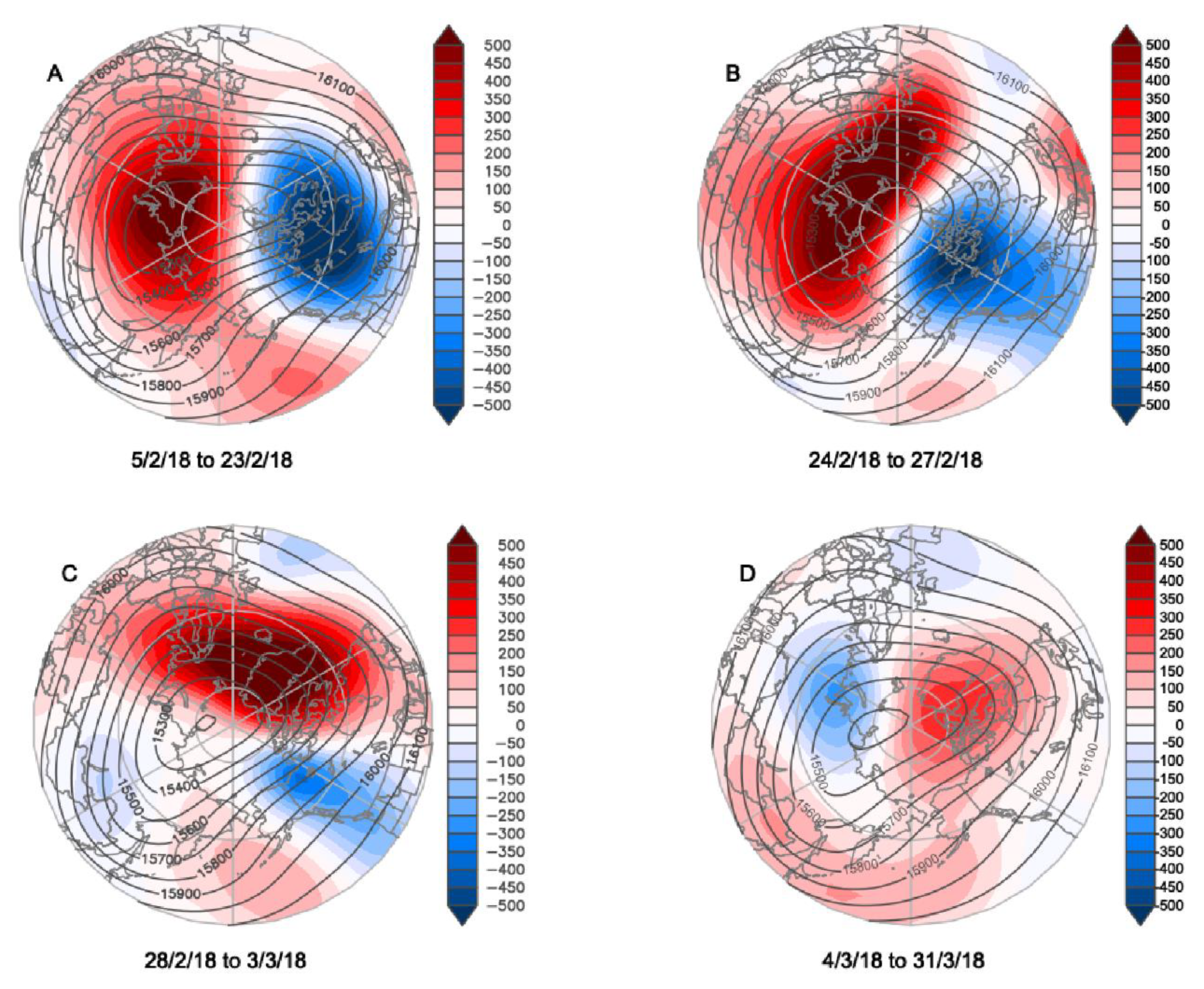 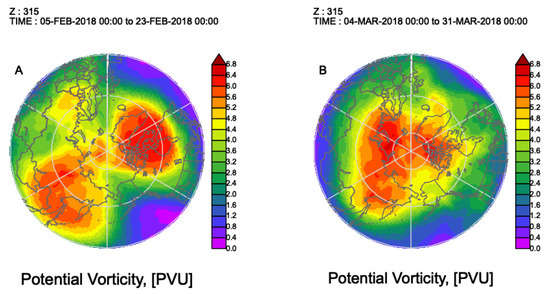 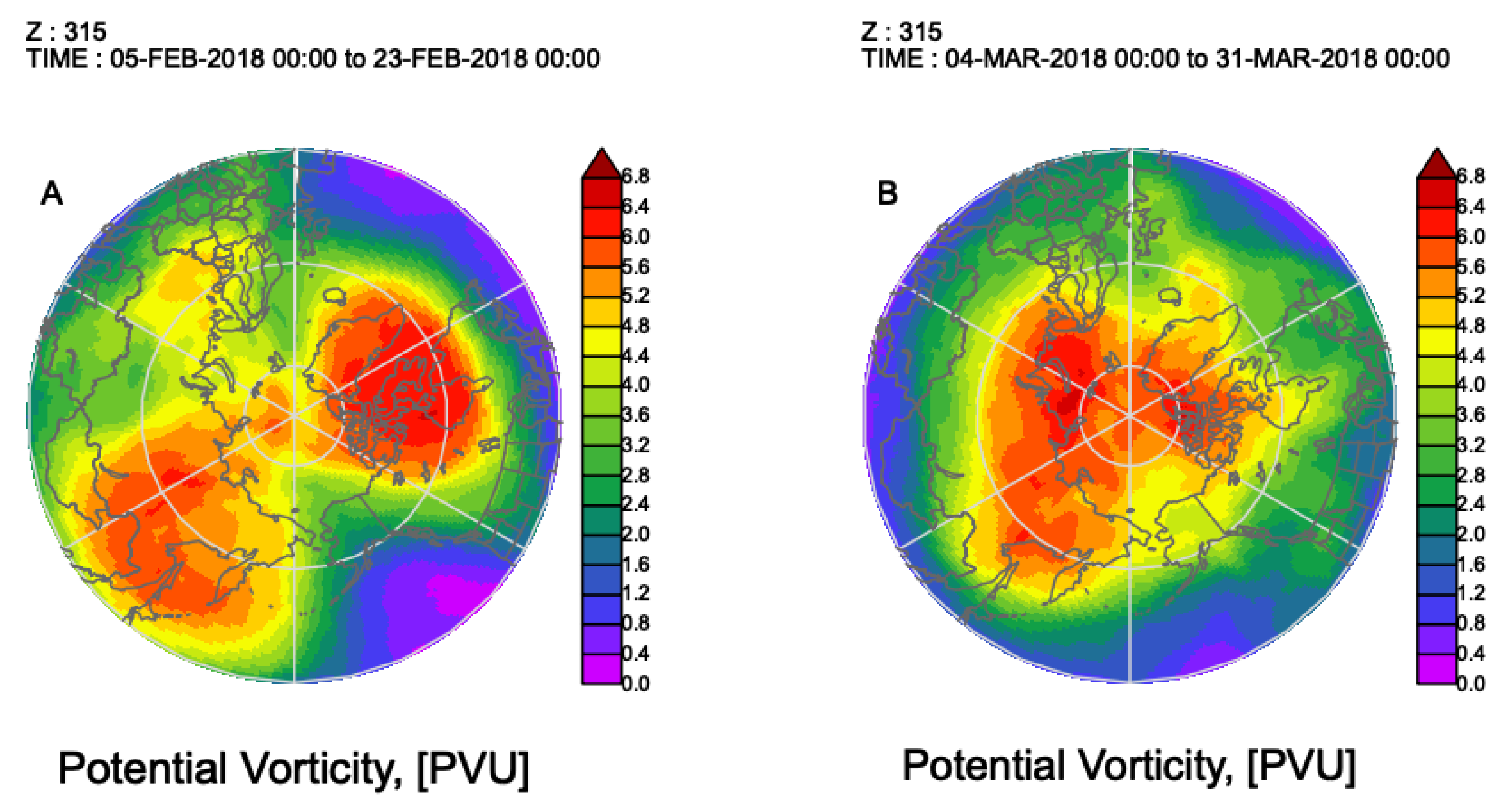 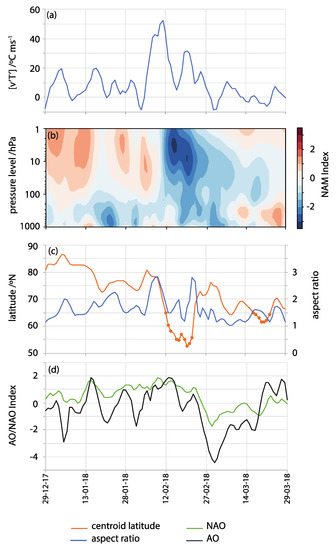 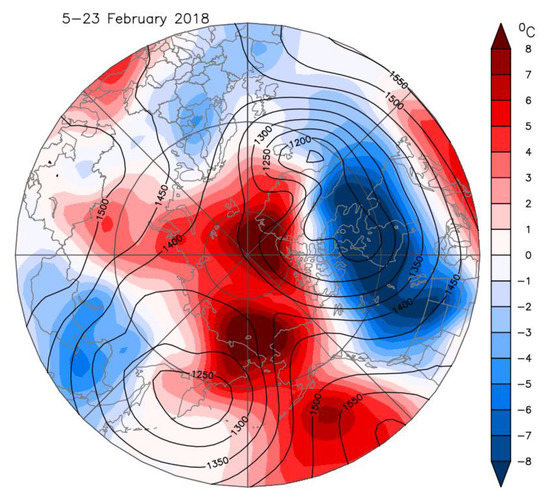 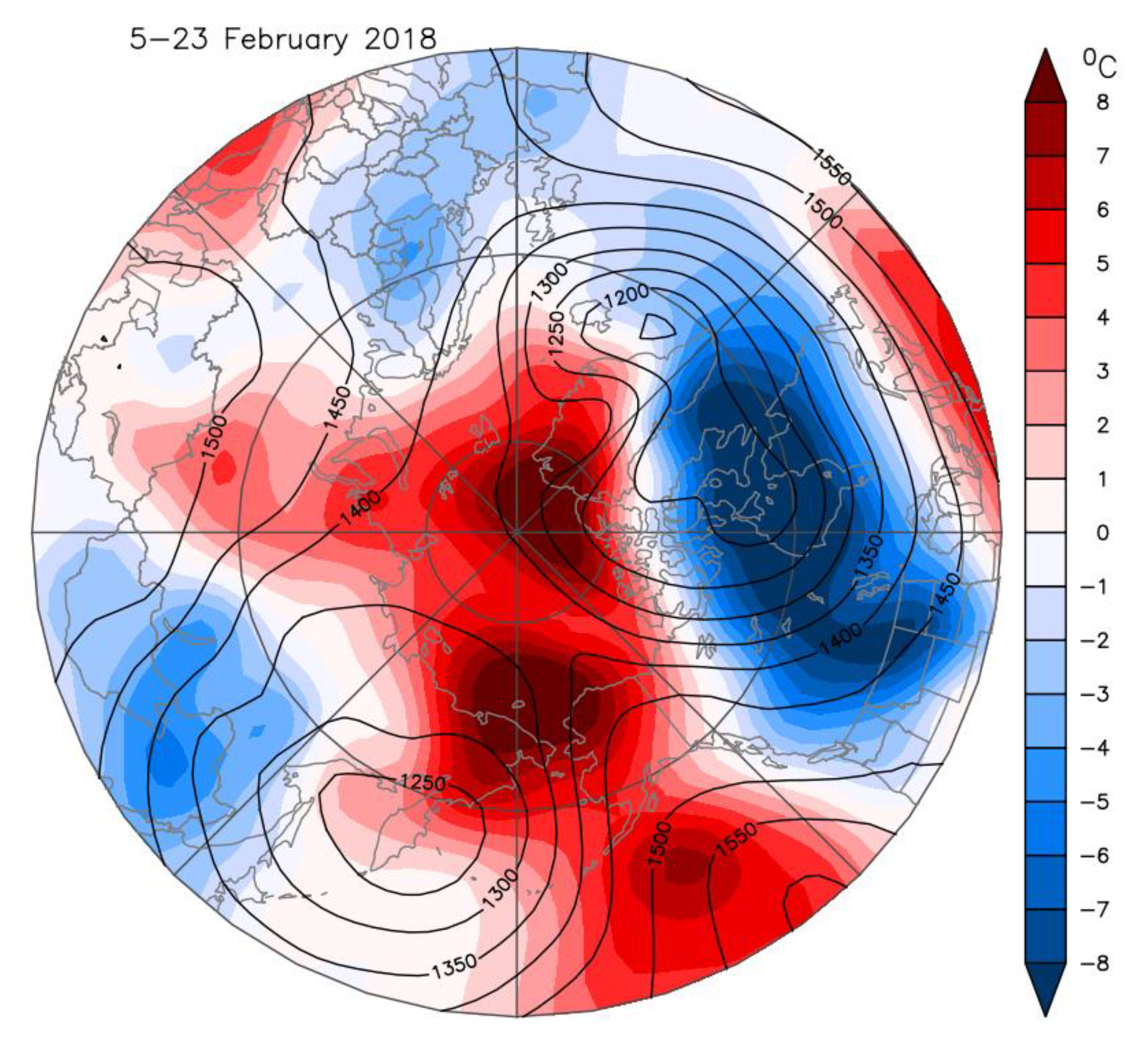 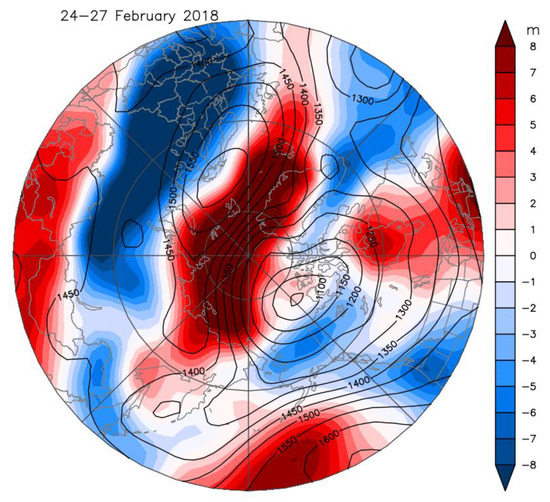 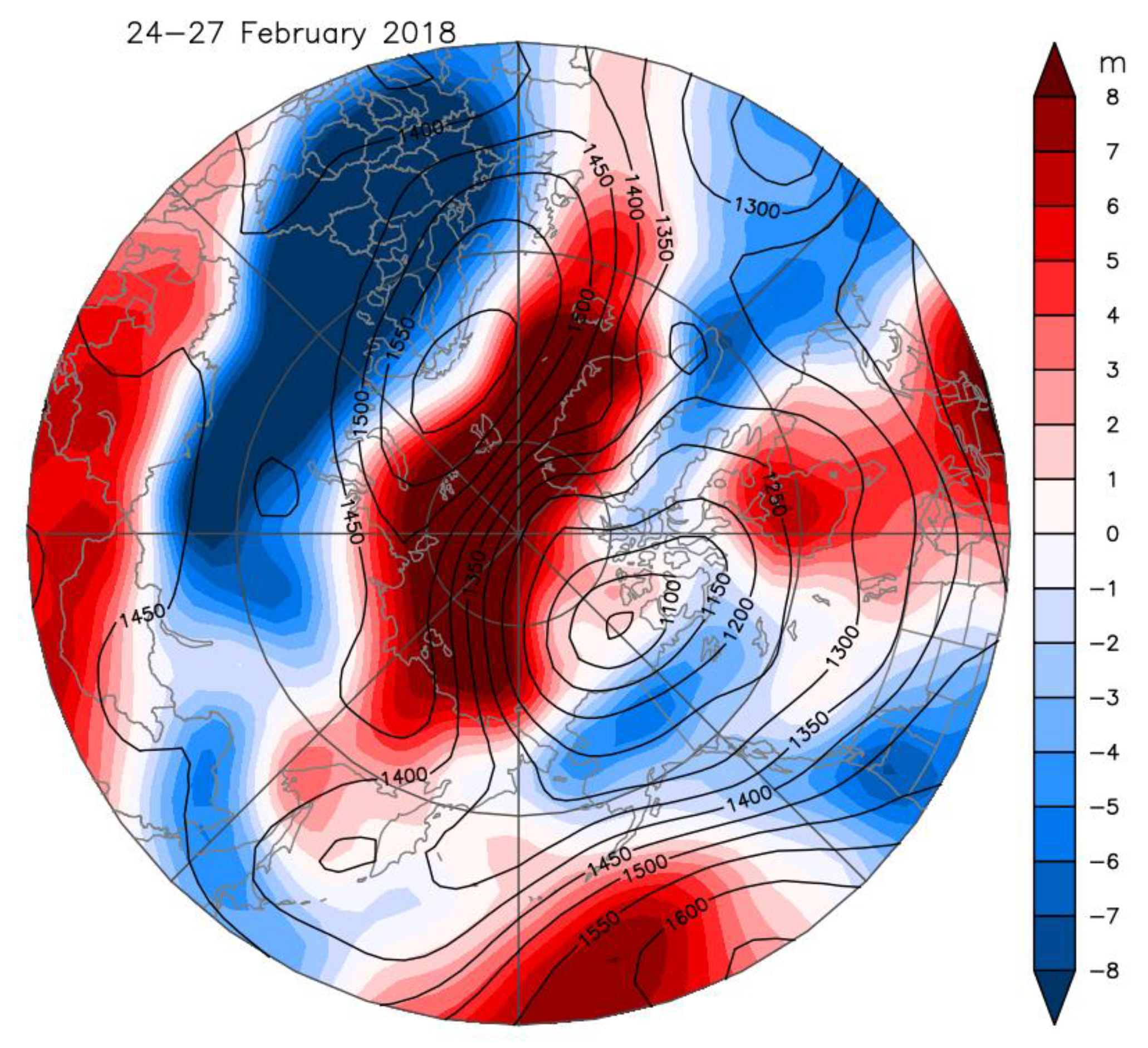 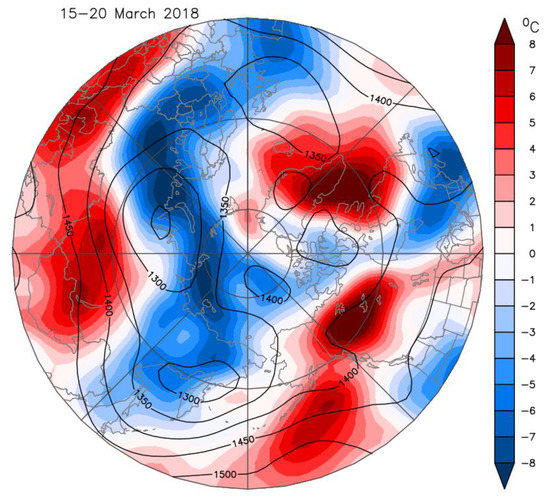