Preface: Ozone Evolution in the Past and Future
Previous Article in Journal

Ozone Trends in the United Kingdom over the Last 30 Years

Stratosphere–Troposphere Exchange and O3 Variability in the Lower Stratosphere and Upper Troposphere over the Irene SHADOZ Site, South Africa

This study aims to investigate the Stratosphere-Troposphere Exchange (STE) events and ozone changes over Irene (25.5° S, 28.1° E). Twelve years of ozonesondes data (2000–2007, 2012–2015) from Irene station operating in the framework of the Southern Hemisphere Additional Ozonesodes (SHADOZ) was used to study the troposphere (0–16 km) and stratosphere (17–28 km) ozone (O3) vertical profiles. Ozone profiles were grouped into three categories (2000–2003, 2004–2007 and 2012–2015) and average composites were calculated for each category. Fifteen O3 enhancement events were identified over the study period. These events were observed in all seasons (one event in summer, four events in autumn, five events in winter and five events in spring); however, they predominantly occur in winter and spring. The STE events presented here are observed to be influenced by the Southern Hemisphere polar vortex. To strengthen the investigation into STE events, advected potential vorticity maps were used, which were assimilated using Modélisation Isentrope du transport Méso–échelle de l’Ozone Stratosphérique par Advection (MIMOSA) model for the 350 K (~12–13 km) isentropic level. These maps indicated transport of high latitude air masses responsible for the reduction of the O3 mole fractions at the lower stratosphere over Irene which coincides with the enhancement of ozone in the upper troposphere. In general, the stratosphere is dominated by higher Modern Retrospective Analysis for Research Application (MERRA-2) potential vorticity (PV) values compared to the troposphere. However, during the STE events, higher PV values from the stratosphere were observed to intrude the troposphere. Ozone decline was observed from 12 km to 24 km with the highest decline occurring from 14 km to 18 km. An average decrease of 6.0% and 9.1% was calculated from 12 to 24 km in 2004–2007 and 2012–2015 respectively, when compared with 2000–2003 average composite. The observed decline occurred in the upper troposphere and lower stratosphere with winter and spring showing more decline compared with summer and autumn. View Full-Text
Keywords: ozone enhancement; Irene; ozone decline; potential vorticity; ozonesondes ozone enhancement; Irene; ozone decline; potential vorticity; ozonesondes
►▼ Show Figures 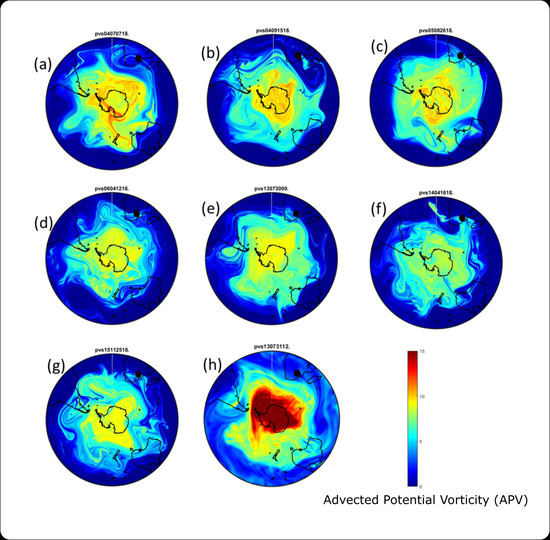