West African Summer Monsoon (WASM) rainfall exhibits large variability at interannual and decadal timescales, causing droughts and floods in many years. Therefore it is important to investigate the major tropospheric features controlling the WASM rainfall and explore its potential to develop an objective monsoon index. In this study, monthly mean reanalysis data from the National Centers for Environmental Prediction/National Center for Atmospheric Research (NCEP/NCAR) and monthly rainfall data from three gridded observations during the 65-year period of 1950–2014 were employed. Dry and wet rainfall years were identified using a standardized precipitation index. In a composite analysis of wet and dry years, the dynamical features controlling the WASM exhibit an obvious contrast between these years, and a weaker (stronger) African Easterly Jet (Tropical Easterly Jet) is observed during the wet years. Also, a well-developed and deep low-level westerly flow at about 850 hPa is evident in wet years while an obvious reversal is observed in dry years. Considering this, the main regions of the two easterly jet streams and low-level westerly wind are proposed for objectively defining an effective WASM index (WASMI). The results indicate that the WASMI defined herein can reflect variations in June–September rainfall over West Africa. The index exhibits most of the variabilities observed in the rainfall series, with high (low) index values occurring in the 1950–1960s (1970–1980s), suggesting that the WASMI is skilled in capturing the respective wet and dry rainfall episodes over the region. Also, the WASMI is significantly correlated (r = 0.8) with summer monsoon rainfall, which further affirms that it can indicate not only variability but also the intensity of WASM rainfall. View Full-Text
Keywords: precipitation; African Easterly Jet; Tropical Easterly Jet; atmospheric circulation precipitation; African Easterly Jet; Tropical Easterly Jet; atmospheric circulation
►▼ Show Figures 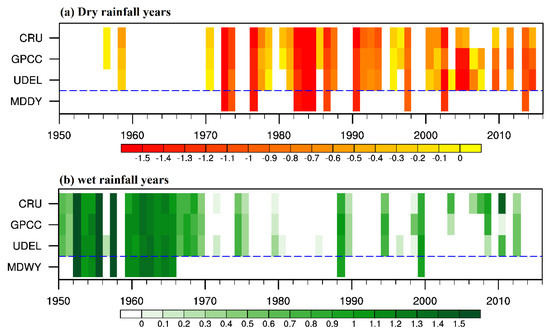