This study focuses on the temporal variation in the compositional characteristics of atmospheric aerosols in Seoul, South Korea, during the consecutive high aerosol concentration episode from 30 December 2013 to 2 January 2014. The temporal variations in the observed physical, optical, and chemical properties show that there were three distinct episodes during the period: haze, mixed haze/Asian dust, and Asian dust episodes. For the haze period, the concentration of secondary inorganic aerosols increased and both secondary inorganic aerosols and calcium species exhibited simultaneously high concentrations during the mixed haze/Asian dust period. The neutralization factors by ammonia in the haze periods were higher as 1.03 than the other periods, meanwhile the neutralization contribution by calcium carbonate was relatively higher as 1.39 during the Asian dust episode. The backward trajectory analysis showed that concentrations of SO42−, NO3−, and NH4+ were relatively high when air masses moved over East China. Principal component analysis showed that water-soluble components originated from soil dust/incineration, secondary aerosols/biomass burning, and road dust from the haze aerosol. For the mixed haze/Asian dust episode, the major source of aerosols was estimated to have originated from soil dust, pollutants from fossil fuel combustion, biomass burning, and sea-salt emissions. Furthermore, the main sources of ionic species in the Asian dust aerosols were estimated to be sea-salt/soil dust, secondary aerosols/coal combustion, and road dust. View Full-Text
Keywords: aerosol; sky radiometer; particle-into-liquid sampler; haze; Asian dust; principal component analysis aerosol; sky radiometer; particle-into-liquid sampler; haze; Asian dust; principal component analysis
►▼ Show Figures 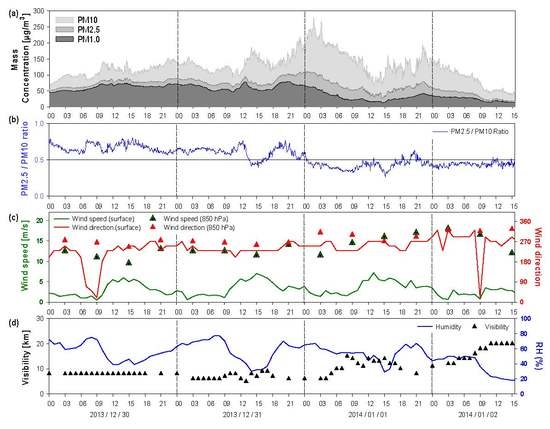