Downward surface solar radiation (SSR) trends for the first decade of the 2000s were computed using a radiative transfer model and satellite and reanalysis input data and were validated against measurements from the reference global station networks Global Energy Balance Archive (GEBA) and Baseline Surface Radiation Network (BSRN). Under all-sky conditions, in spite of a somewhat patchy structure of global dimming and brightening (GDB), an overall dimming was found that is weaker in the Northern than in the Southern Hemisphere (−2.2 and −3.1 W m−2, respectively, over the 2001–2009 period). Dimming is observed over both land and ocean in the two hemispheres, but it is more remarkable over land areas of the Southern Hemisphere. The post-2000 dimming is found to have been primarily caused by clouds, and secondarily by aerosols, with total cloud cover contributing −1.4 W m−2 and aerosol optical thickness −0.7 W m−2 to the global average dimming of −2.65 W m−2. The evaluation of the model-computed GDB against BSRN and GEBA measurements indicates a good agreement, with the same trends for 65% and 64% of the examined stations, respectively. The obtained model results are in line with other studies for specific world regions and confirm the occurrence of an overall solar dimming over the globe during the first decade of 21st century. This post-2000 dimming has succeeded the global brightening observed in the 1990s and points to possible impacts on the ongoing global warming and climate change. View Full-Text
Keywords: surface solar radiation; climate; dimming; brightening; model; stations; satellite data surface solar radiation; climate; dimming; brightening; model; stations; satellite data
►▼ Show Figures 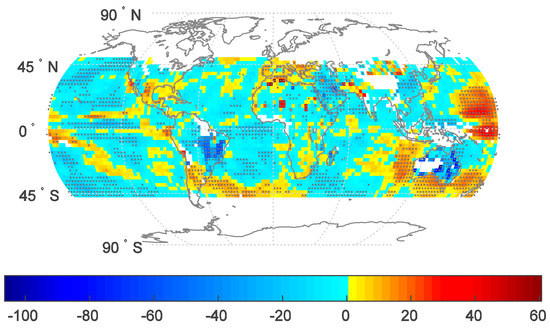