An Alternative to PCA for Estimating Dominant Patterns of Climate Variability and Extremes, with Application to U.S. and China Seasonal Rainfall
Previous Article in Journal

This work examines drought and flood events over Kenya from 1981 to 2016 using the Standardized Precipitation–Evapotranspiration Index (SPEI). The spatiotemporal analysis of dry and wet events was conducted for 3 and 12 months. Extreme drought incidences were observed in the years 1987, 2000, 2006, and 2009 for SPEI-3, whilst the SPEI-12 demonstrated the manifestation of drought during the years 2000 and 2006. The SPEI showed that the wettest periods, 1997 and 1998, coincided with the El Nino event for both time steps. SPEI-3 showed a reduction in moderate drought events, while severe and extreme cases were on the increase tendencies towards the end of the twentieth century. Conversely, SPEI-12 depicted an overall increase in severe drought occurrence over the study location with ab observed intensity of −1.54 and a cumulative frequency of 64 months during the study period. Wet events showed an upward trend in the western and central highlands, while the rest of the regions showed an increase in dry events during the study period. Moreover, moderate dry/wet events predominated, whilst extreme events occurred least frequently across all grid cells. It is apparent that the study area experienced mild extreme dry events in both categories, although moderately severe dry events dominated most parts of the study area. A high intensity and frequency of drought was noted in SPEI-3, while the least occurrences of extreme events were recorded in SPEI-12. Though drought event prevailed across the study area, there was evidence of extreme flood conditions over the recent decades. These findings form a good basis for next step of research that will look at the projection of droughts over the study area based on regional climate models. View Full-Text
Keywords: drought; SPEI; wet; severity; frequency; duration; Kenya drought; SPEI; wet; severity; frequency; duration; Kenya
►▼ Show Figures 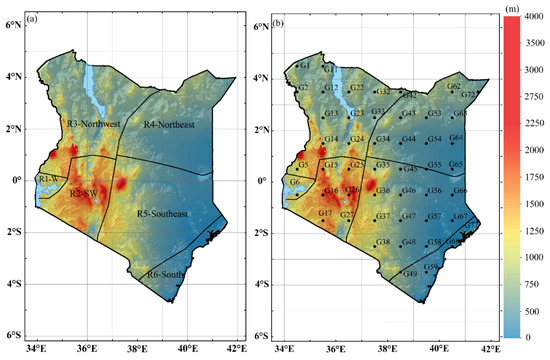