Adaption of an Evaporative Desert Cooler into a Liquid Desiccant Air Conditioner: Experimental and Numerical Analysis
Previous Article in Journal

Improving air quality in urban environments and transportation systems is crucial. Concerns are related to health and environmental issues associated with huge costs. Car cabin is a microenvironment where pollutants can accumulate with possible risks for occupants. In automotive engineering, it has then become mandatory to study the path and dispersion of such pollutants emitted from the tailpipe of a car. In the present paper, the relation between the flow topology and the dispersion of ultrafine particles (UFP) in the wake of a vehicle is discussed. Experiments were undertaken at a reduced scale using simplified car models. Experimental conditions were defined to be representative of a vehicle in an urban environment. Based on experimental data, a simplified analytical model is developed, which aims at describing the concentration fields of UFP in the wake of a single vehicle for different rear slant angles. The strengths and limits of the present model are discussed and ways of improvements are suggested. Additional experiments are presented to assess the influence of the inter-vehicle distance on this recirculation region. Critical inter-vehicle distances were determined based on defined criteria for different rear slant angles of the leading vehicle and compared to safety clearances. View Full-Text
Keywords: pollutant dispersion; ultrafine particles; wind tunnel; analytical model; ahmed bodies; wake flows pollutant dispersion; ultrafine particles; wind tunnel; analytical model; ahmed bodies; wake flows
►▼ Show Figures 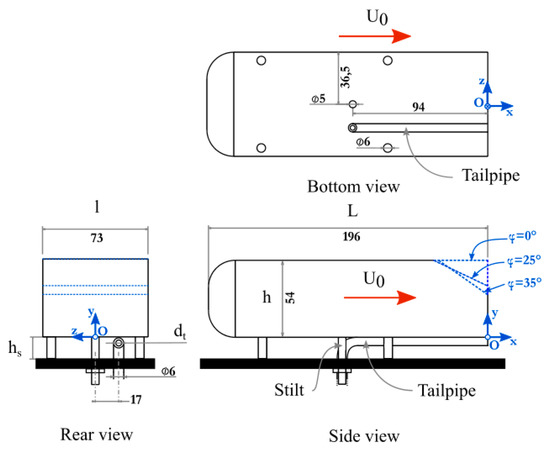