Altered melanosome transport in melanocytes, resulting from variants in the melanophilin (MLPH) gene, are associated with inherited forms of coat color dilution in many species. In dogs, the MLPH gene corresponds to the D locus and two variants, c.−22G > A (d1) and c.705G > C (d2), leading to the dilution of coat color, as described. Here, we describe the independent investigations of dogs whose coat color dilution could not be explained by known variants, and who report a third MLPH variant, (c.667_668insC) (d3), which leads to a frameshift and premature stop codon (p.His223Profs*41). The d3 allele is found at low frequency in multiple dog breeds, as well as in wolves, wolf-dog hybrids, and indigenous dogs. Canids in which the d3 allele contributed to the grey (dilute) phenotype were d1/d3 compound heterozygotes or d3 homozygotes, and all non-dilute related dogs had one or two D alleles, consistent with a recessive inheritance. Similar to other loci responsible for coat colors in dogs, this, alongside likely additional allelic heterogeneity at the D locus, or other loci, must be considered when performing and interpreting genetic testing. View Full-Text
Keywords: Canis lupus; mammalian pigmentation; melanophilin; coat color dilution; coat color genes; coat color phenotypes Canis lupus; mammalian pigmentation; melanophilin; coat color dilution; coat color genes; coat color phenotypes
►▼ Show Figures 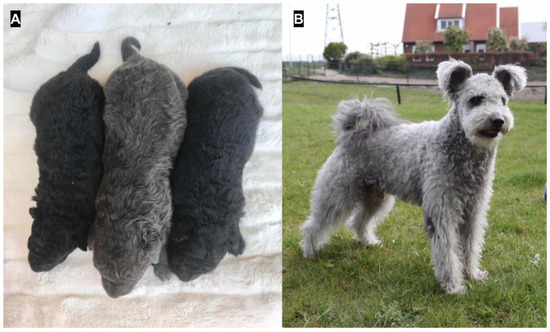