Being Merle: The Molecular Genetic Background of the Canine Merle Mutation
Previous Article in Journal

Although the European roe deer (Capreolus capreolus) population of North-West Germany has a remarkable number of melanistic specimens between 10% and 25%, the underlying genetic mutation-causing melanism is still unknown. We used a gene targeting approach focusing on MC1R and ASIP as important genes of coat coloration. Overall, 1384 bp of MC1R and 2039 bp of ASIP were sequenced in 24 specimens and several SNPs were detected. But only the ASIP-SNP c.33G>T completely segregated both phenotypes leading to the amino acid substitution p.Leu11Phe. The SNP was further evaluated in additional 471 samples. Generally, all black specimens (n = 33) were homozygous TT, whereas chestnut individuals were either homozygote GG (n = 436) or heterozygote GT (n = 26). Considering the fact that all melanistic animals shared two mutated alleles of the strongly associated SNP, we concluded that melanism is inherited in a recessive mode in European roe deer. View Full-Text
Keywords: coat color; melanistic; cervid; ASIP; MC1R coat color; melanistic; cervid; ASIP; MC1R
►▼ Show Figures 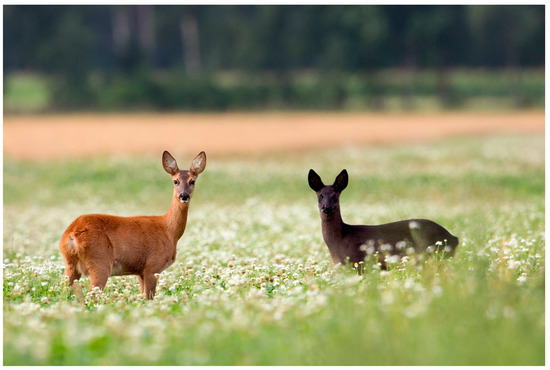