Background: Homozygosity for the X-allele in the ACTN3 R577X (rs1815739) polymorphism results in the complete absence of α-actinin-3 in sarcomeres of fast-type muscle fibers. In elite athletes, the ACTN3 XX genotype has been related to inferior performance in speed and power-oriented sports; however, its influence on exercise phenotypes in recreational athletes has received less attention. We sought to determine the influence of ACTN3 genotypes on common exercise phenotypes in recreational marathon runners. Methods: A total of 136 marathoners (116 men and 20 women) were subjected to laboratory testing that included measurements of body composition, isometric muscle force, muscle flexibility, ankle dorsiflexion, and the energy cost of running. ACTN3 genotyping was performed using TaqMan probes. Results: 37 runners (27.2%) had the RR genotype, 67 (49.3%) were RX and 32 (23.5%) were XX. There was a difference in body fat percentage between RR and XX genotype groups (15.7 ± 5.8 vs. 18.8 ± 5.5%; effect size, ES, = 0.5 ± 0.4, p = 0.024), whereas the distance obtained in the sit-and-reach-test was likely lower in the RX than in the XX group (15.3 ± 7.8 vs. 18.4 ± 9.9 cm; ES = 0.4 ± 0.4, p = 0.046). Maximal dorsiflexion during the weight-bearing lunge test was different in the RR and XX groups (54.8 ± 5.8 vs. 57.7 ± 5.1 degree; ES = 0.5 ± 0.5, p = 0.044). Maximal isometric force was higher in the RR than in the XX group (16.7 ± 4.7 vs. 14.7 ± 4.0 N/kg; ES = −0.5 ± 0.3, p = 0.038). There was no difference in the energy cost of running between genotypes (~4.8 J/kg/min for all three groups, ES ~0.2 ± 0.4). Conclusions: The ACTN3 genotype might influence several exercise phenotypes in recreational marathoners. Deficiency in α-actinin-3 might be accompanied by higher body fatness, lower muscle strength and higher muscle flexibility and range of motion. Although there is not yet a scientific rationale for the use of commercial genetic tests to predict sports performance, recreational marathon runners who have performed such types of testing and have the ACTN3 XX genotype might perhaps benefit from personalized strength training to improve their performance more than their counterparts with other ACTN3 genotypes. View Full-Text
Keywords: α-actinin; exercise; performance; endurance; genetics; single nucleotide polymorphism α-actinin; exercise; performance; endurance; genetics; single nucleotide polymorphism
►▼ Show Figures 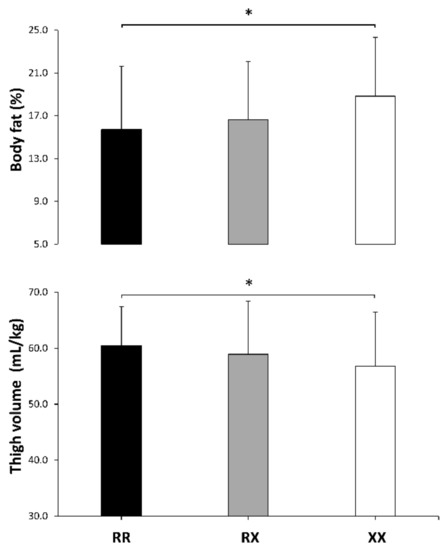