In the ciliate Stylonychia, somatic macronuclei differentiate from germline micronuclei during sexual reproduction, accompanied by developmental sequence reduction. Concomitantly, over 95% of micronuclear sequences adopt a heterochromatin structure characterized by the histone variant H3.4 and H3K27me3. RNAi-related genes and histone variants dominate the list of developmentally expressed genes. Simultaneously, 27nt-ncRNAs that match sequences retained in new macronuclei are synthesized and bound by PIWI1. Recently, we proposed a mechanistic model for ‘RNA-induced DNA replication interference’ (RIRI): during polytene chromosome formation PIWI1/27nt-RNA-complexes target macronucleus-destined sequences (MDS) by base-pairing and temporarily cause locally stalled replication. At polytene chromosomal segments with ongoing replication, H3.4K27me3-nucleosomes become selectively deposited, thus dictating the prospective heterochromatin structure of these areas. Consequently, these micronucleus-specific sequences become degraded, whereas 27nt-RNA-covered sites remain protected. However, the biogenesis of the 27nt-RNAs remains unclear. It was proposed earlier that in stichotrichous ciliates 27nt-RNA precursors could derive from telomere-primed bidirectional transcription of nanochromosomes and subsequent Dicer-like (DCL) activity. As a minimalistic explanation, we propose here that the 27nt-RNA precursor could rather be mRNA or pre-mRNA and that the transition of coding RNA from parental macronuclei to non-coding RNAs, which act in premature developing macronuclei, could involve RNA-dependent RNA polymerase (RDRP) activity creating dsRNA intermediates prior to a DCL-dependent pathway. Interestingly, by such mechanism the partition of a parental somatic genome and possibly also the specific nanochromosome copy numbers could be vertically transmitted to the differentiating nuclei of the offspring.
Keywords: macronuclear development; RNA-induced DNA replication interference; ciliates; nuclear dualism macronuclear development; RNA-induced DNA replication interference; ciliates; nuclear dualism

Many small non-coding RNAs (ncRNAs) inhabit control function for cellular processes including the regulation of gene expression and chromatin structure. The RNA interference (RNAi)-dependent formation of heterochromatin might be best understood in fission yeast [1], Arabidopsis [2] and the ciliate Tetrahymena (class: Oligohymenophorea) [3,4], wherein extensive developmental chromatin reorganization processes occur. Single ciliate cells contain two types of nuclei, solitary or multiple germline micronuclei and somatic macronuclei. A macronucleus develops from a micronucleus-derivative during sexual reproduction, which starts when two cells of different mating types conjugate [5,6]. Macronuclear development in the course of ciliate sexual reproduction involves chromatin reorganization and programmed DNA elimination. Whereas this process is a major differentiator of the Ciliophora taxon within in the tree of eukaryotic life, evolutionary history resulted in several fundamentally different variations on the molecular mechanisms and how these peculiar single-celled organisms keep control over these sophisticated genome rearrangements. In this mini-review, we address the open problem: how development-specific small ncRNAs could become synthesized in spirotrichous ciliates like Stylonychia or Oxytricha, since this key mechanism seems to differ fundamentally from Tetrahymena or Paramecium—two genera for which much more data is available to date.

In Tetrahymena, non-coding ‘scnRNA’ guide the programmed elimination of germline-restricted DNA sequences, which become targeted by sequence homology. Their precursors are bi-directionally transcribed from the micronuclear chromosomes encompassing germline-restricted and macronucleus-destined sequences. Then, Dicer-like activity by Dcl1p is required for the production of ~29nt-RNAs, which become bound by the PIWI-homolog Twi1p followed by slicing, i.e. the passenger strand removal, and 3’-end 2’-O-methylation via the methyltransferase Hen1p. Subsequently, a genome comparison/selection process (‘scanning’) is undergone in the degrading parental macronucleus, leading to the degradation of ~29nt-RNAs matching to homologous macronucleus sequences. The resulting scnRNAs target micronucleus-specific sequences not required in the mature macronucleus. Subsequently, H3K9me3 and H3K27me3 become enriched at these sequences. This process involves the activity of the histone lysine methyltransferase (KMT) EZL1. Prior to their elimination, these sequences become transformed into heterochromatin through binding of the chromodomain protein PDD1p at both H3K9me3 and H3K27me3 [3,4]. A similar ‘genome-scanning model’ is proposed for Paramecium. Here, ~25nt-RNAs result from precursors, which derive from whole micronuclear genome transcription. In the parental macronucleus, they undergo a genome comparison against macronuclear non-coding transcripts, which are constitutively produced in vegetative cells [7].

3. Developmental Small Non-Coding RNAs Do Not Target Micronucleus-Specific Sequences in Spirotrichous Ciliates, but Safeguard the Retention of Macronucleus-Destined Sequences

Interestingly, in ciliates belonging to the class Spirotrichea an apparently inverse role for developmental small non-coding RNAs was observed. Here, 27nt-RNAs are synthesized from the parental macronucleus. The macronulceus genome in Oxytricha trifallax and Stylonychia lemnae comprises of so-called nanochromosomes harbouring mostly one or few genes flanked by discrete telomeric repeats. In a mature macronucleus, each nanochromosome occurs in a specific copy number [8,9]. In both species, developmental 27nt-RNAs target macronucleus-specific sequences in developing macronuclei in association with Argonaute/PIWI-protein homologs [10,11,12,13]. For Oxytricha it was proposed that these 27nt-RNAs protect specific sequences from being degraded. However, no deeper mechanistic insight was provided [10]. A valuable study complemented this study by a biochemical characterization of the Oxytricha 27nt-RNAs demonstrating that they are not modified by 2’-O-methylation at their 3’-end, in contrast to Tetrahymena scnRNAs [14]. Outgoing from the observation that the vast majority of 27nt-RNAs match macronuclear nanochromosomes bi-directionally but omit their telomeres, the same study hypothesizes that the biogenesis of 27nt-RNA precursors could originate from telomere-primed transcription of both DNA strands. Theoretically, this is a reasonable hypothesis, whose mechanism would safeguard the even transformation of the macronuclear DNA sequence information (with the exception of telomeres, which become de novo added by telomerase) and possibly also the nanochromosome copy numbers to a long non-coding RNA level. However, it is challenged by the observation that telomeres occur in a very stable G-quadruplex conformation that most probably is not easily accessible for telomere-priming activity [15,16]. To date in Stylonychia, a telomeric G-quadruplex resolving RecQ-like helicase activity (in association with telomerase) was exclusively observed in the replication band of vegetative macronuclei, but not in the parental macronulcear fragments during sexual reproduction [17]. Therefore, we believe that our data from Stylonychia justifies an alternative hypothesis how the biogenesis of 27nt-RNAs could occur. Our thoughts will be exemplified in the following paragraphs.

Stylonychia has a long history as a model for macronuclear differentiation. Here, developmental chromatin reorganization eventually leads to the formation of >16,000 different gene-sized linear nanochromosomes in the mature macronucleus [18], whereby over 95% of the micronuclear sequences become degraded, most of which comprise repetitive and unique sequences from micronucleus-specific intergenic DNA [5]. Apart from this bulk DNA, internal eliminated sequences (IESs) interrupt macronucleus-destined sequences (MDSs) within many micronuclear genes. MDSs frequently occur in scrambled disorder, when compared with their proper arrangement in mature nanochromosomes [19]. IESs can be as short as 10 bp and must be removed during macronuclear differentiation [20]. Prior to the reduction of germline-specific sequences the diploid zygote genome undergoes polytene chromosome formation in a first phase of serial DNA replication [21]. In this stage, IES excision and reordering of MDSs in scrambled genes take place [22], prior to the massive reduction of bulk DNA sequences, which eventually leads to the breakdown of polytene chromosomes [5,6]. In Stylonychia histone post-translational modifications (PTM) have been extensively studied [12,23,24]. For example, H3K27me3 accumulates at micronucleus-specific sequences prior to their elimination, and ultrastructural studies show that excised DNA occurs in form of condensed chromatin [25]. Macronuclear development depends on sncRNAs [12] and the Argonaute family protein PIWI1, which appears to be a driver for RNA trafficking and trans-nuclear crosstalk [11,24]. Furthermore, a not yet deeply characterized RNA species might be involved in MDS reordering, IES excision, nanochromosome copy number determination and telomere addition [8,9,26,27]. The most recent studies suggest that in Stylonychia the deposition of multiple histone variant-containing nucleosomes into chromatin of different nuclear types and their association with specific sequence-classes play a superior role in developmental chromatin reorganization with Stylonychia being among the list of eukaryotes encoding very high numbers of histone variants [23]: six H2A, four H2B, nine H3 and two H4. Due to discrete amino acid substitutions, gains or losses it seems clear that the range of possible PTMs for each of the 9 histone H3 variants but also other histone types is diversified. We showed that the spatiotemporal occurrence of histone variants in the life cycle of Stylonychia is highly regulated, and we found evidence that the expression of some H3 variants might be influenced by PIWI1-dependent RNAi [23]. More recent findings, moreover, highlight the possibility that non-coding 27nt-RNAs could directly play a crucial role in the regulation of histone variant deposition into polytene chromosomes of developing macronuclei: The ‘RNA-induced DNA replication interference’ (RIRI)-model provides a mechanistic explanation how 27nt-RNAs could protect DNA from being lost during macronuclear development [13]. Accordingly, PIWI1/27nt-RNA complexes block polytenization of covered MDSs, thus limiting the replication-dependent de novo deposition of nucleosomes. Meanwhile, a histone H3 variant (H3.4) that is permissive for H3K27me3 becomes enriched at specific sites under ongoing replication, whereas MDSs are omitted from the deposition of H3K27me3. Here, it appears that trimethylation of lysine 27 takes place on cytoplasmic H3 before its site-specific chromatin deposition in the developing macronucleus (Figure 1). The observation of cytoplasmic post-translational histone modification seems unusual, but co-translational lysine methylation of H3 was recently observed also in human cervical cancer cells (HeLa) [28]. This important observation is supportive for the RIRI-model, since the requirement of a putative site directed H3K27-specific histone methyltransferase activity would be obsolete. Eventually, this tight spatiotemporal coordination of histone-variant deposition leads to the establishment of a chromatin structure barcode, where the formation of heterochromatin bands via H3.4K27me3 is limited to those regions not protected by PIWI1/27nt-RNA complexes. Consequently, bulk intergenic DNA is specified for elimination and thus becomes functionally separated from sequences that must be retained in mature macronuclei.

5. A Minimalistic Model for the Biogenesis of 27nt-RNAs—Is mRNA/pre-mRNA the Substrate?

Taken together, in our review we summarize evidence that the small RNA species occurring in Stylonychia could result from processing of pre-mRNA or/and mRNA. With emphasis on macronuclear development it might be the case that a catholic pool of mRNAs accumulates in the parental macronuclei and does not become further edited and translated into proteins. Instead, mRNAs become converted into 27nt-RNAs, possibly involving RDRP-activity (double strand conversion, signal amplification) and Dicer-like activity (27nt-RNA processing prior to PIWI1 loading). If this proposed mechanism exists it could provide an elegant explanation of how protein-coding information (mRNA) from parental somatic nuclei (thus their transcription profiles determining the phenotype) can be converted into non-coding information that is used to transmit the functional partitioning of the parental genome to the offspring.

We thank the Centre for Biomedical Education & Research (ZBAF) at Witten/Herdecke University for administrative support. 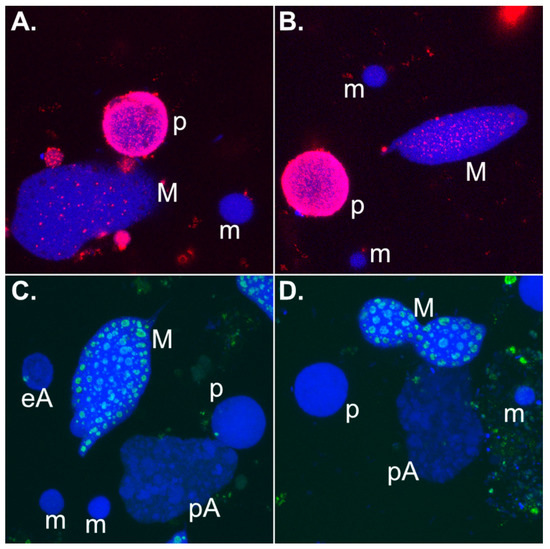