The Mechanisms of Mating in Pathogenic Fungi—A Plastic Trait

The sea lamprey (Petromyzon marinus) is one of few vertebrate species known to reproducibly eliminate large fractions of its genome during normal embryonic development. This germline-specific DNA is lost in the form of large fragments, including entire chromosomes, and available evidence suggests that DNA elimination acts as a permanent silencing mechanism that prevents the somatic expression of a specific subset of “germline” genes. However, reconstruction of eliminated regions has proven to be challenging due to the complexity of the lamprey karyotype. We applied an integrative approach aimed at further characterization of the large-scale structure of eliminated segments, including: (1) in silico identification of germline-enriched repeats; (2) mapping the chromosomal location of specific repetitive sequences in germline metaphases; and (3) 3D DNA/DNA-hybridization to embryonic lagging anaphases, which permitted us to both verify the specificity of elements to physically eliminated chromosomes and characterize the subcellular organization of these elements during elimination. This approach resulted in the discovery of several repetitive elements that are found exclusively on the eliminated chromosomes, which subsequently permitted the identification of 12 individual chromosomes that are programmatically eliminated during early embryogenesis. The fidelity and specificity of these highly abundant sequences, their distinctive patterning in eliminated chromosomes, and subcellular localization in elimination anaphases suggest that these sequences might contribute to the specific targeting of chromosomes for elimination or possibly in molecular interactions that mediate their decelerated poleward movement in chromosome elimination anaphases, isolation into micronuclei and eventual degradation. View Full-Text
Keywords: chromosome elimination; chromatin diminution; sea lamprey; chromosome lagging; repetitive DNA chromosome elimination; chromatin diminution; sea lamprey; chromosome lagging; repetitive DNA
►▼ Show Figures 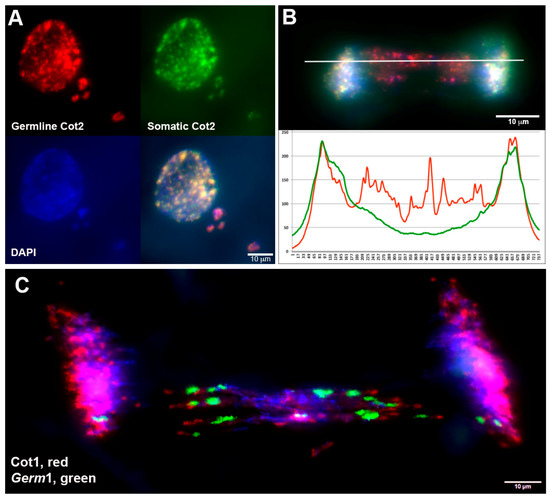