The history of dog domestication is still under debate, but it is doubtless the process of an ancient partnership between dogs (Canis familiaris) and humans. Although data on ancient DNA for dog diversity are still incomplete, it is clear that several regional dog populations had formed in Eurasia up to the Holocene. During the Neolithic Revolution and the transition from hunter-gatherer to farmer societies, followed by civilization changes in the Antiquity period, the dog population structure also changed. This process was due to replacement with newly formed dog populations. In this study, we present for the first time mitochondrial data of ancient dog remains from the Early Neolithic (8000 years before present (BP)) to Late Antiquity (up to 3th century AD) from southeastern Europe (the Balkans). A total of 16 samples were analyzed, using the mitochondrial D-loop region (HVR1). The results show the presence of A (70%) and B (25%) clades throughout the Early and Late Neolithic Period. In order to clarify the position of our results within the ancient dog population in Eneolithic Eurasia, we performed phylogenetic analysis with the available genetic data sets. This data showed a similarity of the ancient Bulgarian dogs to Italian (A, B, and C clades) and Iberian (clades A and C) dogs’ populations. A clear border can be seen between southern European genetic dog structure, on the one hand, and on the other hand, central-western (clade C), eastern (clade D) and northern Europe (clades A and C). This corresponds to genetic data for European humans during the same period, without admixture between dog populations. Also, our data have shown the presence of clade B in ancient Eurasia. This is not unexpected, as the B haplogroup is widely distributed in extant Balkan dogs and wolves. The presence of this clade both in dogs and in wolves on the Balkans may be explained with hybridization events before the Neolithic period. The spreading of this clade across Europe, together with the A clade, is related to the possible dissemination of newly formed dog breeds from Ancient Greece, Thrace, and the Roman Empire. View Full-Text
Keywords: ancient DNA; population structure; dog; the Balkans ancient DNA; population structure; dog; the Balkans
►▼ Show Figures 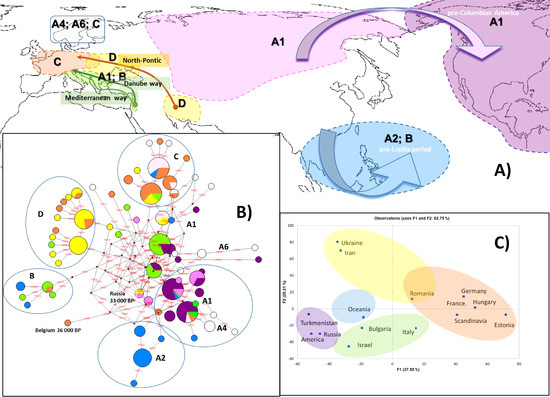